We took an extremely long flight to the first country we would visit in South America. It was multiple hours of minimal comfort, so we were relieved when we finally arrived in Buenos Aries. After taking a cab to our apartment, we stumbled up the stairs with our kind hosts. We learned that it is customary in Argentina to say hello to people with hugs and kisses. One of greatest places in Buenos Aries is its main cemetery. There are hundreds of uniquely built graves. Except they aren’t really graves. They look like stone closets three times my height, with statues and carvings and intricate glass windows. It felt like you were in a maze. There were all sorts of stories about famous people buried in the graveyard. One lady was buried alive while in a coma. Another man is said to haunt the graveyard at midnight. The First Lady of Argentina is buried there as well. Most days in Buenos Aries involved catching up on school. The rest of my family was enrolled in Spanish school, while I sat outside and did my French. Two of the days a guide from the Spanish school took us on a guided tour around Buenos Aries. The first day of the tours we were guided by Sonia, a sweet lady who educated us on the cultural aspect of Buenos Aries. The second day we were with Cecilia. She taught us about the language. With Sonia we visited one of the most beautiful bookstores in the world. It used to be a theatre, than a cinema, and finally a bookstore. We also took a walk through the market, where we came across a massive tree, the most beautiful I’d ever seen. The second day we walked to a park and tried a traditional Argentinian drink: Matte. It has a Smokey taste, and it’s sort of like tea. 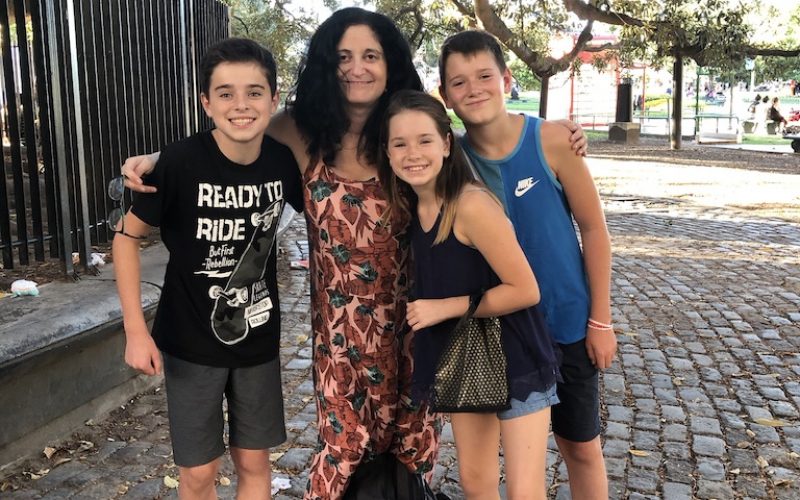 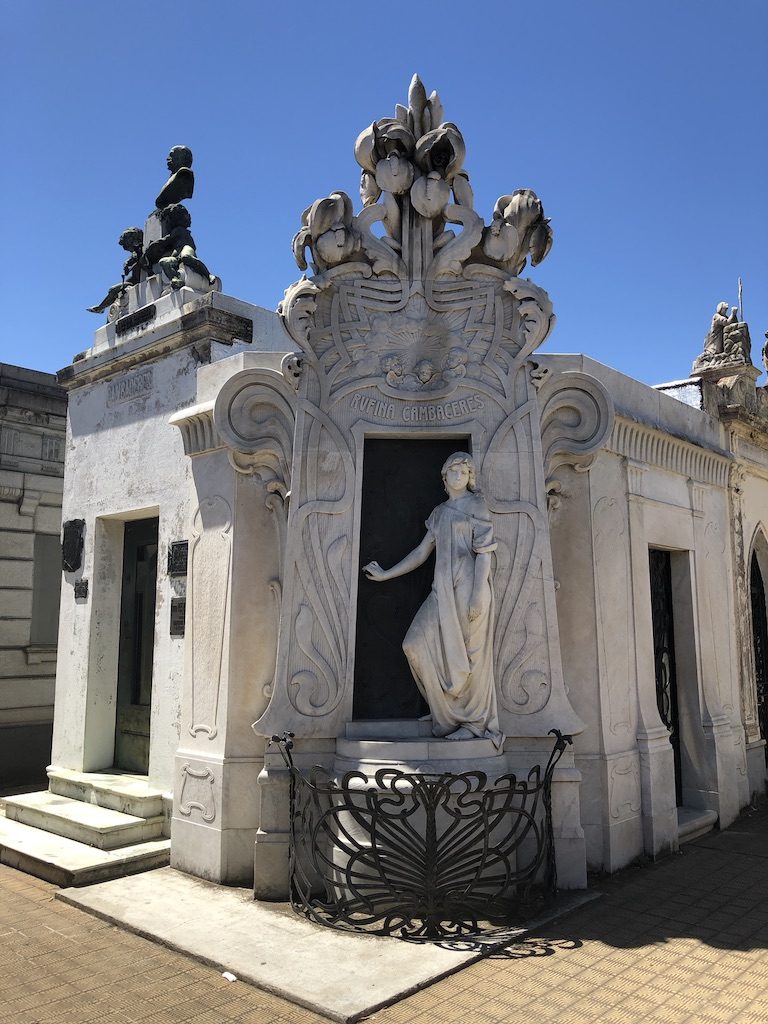 A few days later we took a 17 hour bus ride to Puerto Iguzi. We walked into our apartment tired, and went for a swim in the pool that was luckily there and ready. The next day we woke up and hopped in a car. That was a half an hour drive to a train that took twenty minutes. The train took us to the Ugazu falls. The falls are the biggest in the world, and the most beautiful I will ever see. I guarantee it. We completed three jungle hikes, each taking us to different vantage points on the roaring falls. I saw more spiders in 15 minutes of any of those jungle walks than I had in my entire life. It made me very itchy. After my fear facing me, we came across some animals I can actually enjoy: Coates. They look like a cross between an anteater, a pig, and a raccoon. They are ADORABLE, and they really wanted our PBJ’s. After a long journey home, we took a dunk in the pool, and crashed. Another day we went to the Brazilian side of the falls. The cab driver took us across the border, and we entered the park. Luckily, there wasn’t as many spiders on the Brazilian side as there were on the Argentinian side. However, they were still there. After a few minutes of driving through the jungle, we arrived at a boat launch. We piled into an inflatable speed boat and sped up the river to the falls. We were so exited because we knew that the boat was actually going to drive under one of the smaller falls. We were going to get soaked. We sped in between rocks and bounced over rapids. Finally we arrived at the mini falls. The boat started driving in circles, doing rotations and driving under the falls. The water was heavy and welcome in the Brazilian heat. We were all laughing as we bounced across the rapids. After we got off the boat, soaked, we went an a few trails around the falls. With stunning views and and excess of spiders, we enjoyed the Brazilian side of the falls. 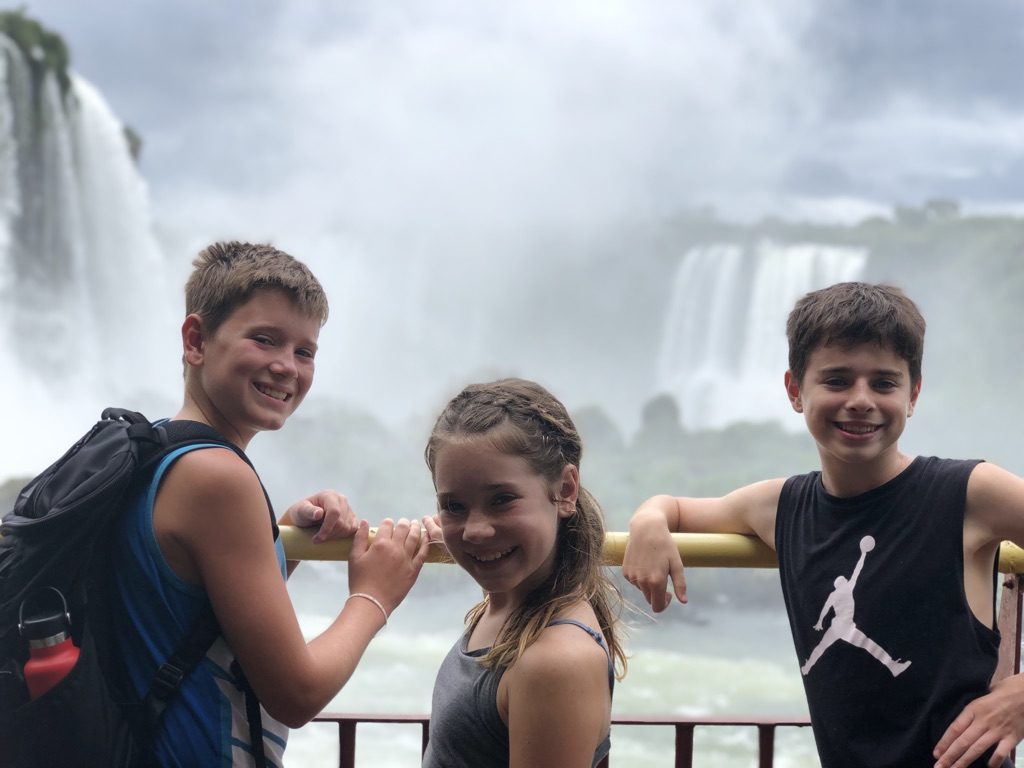 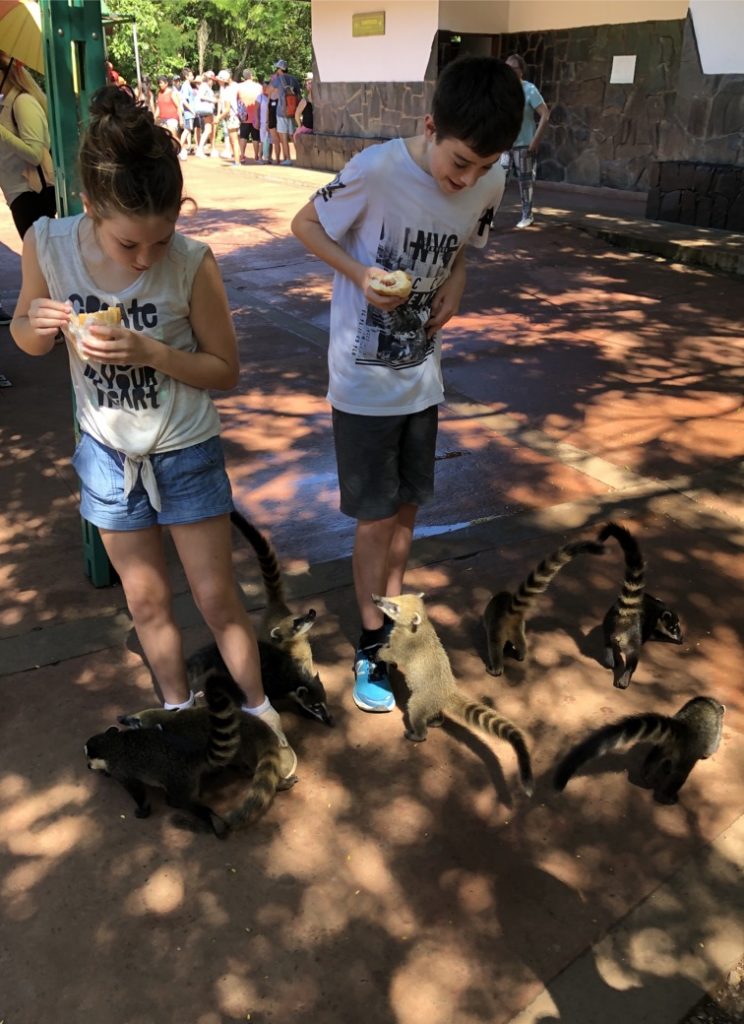 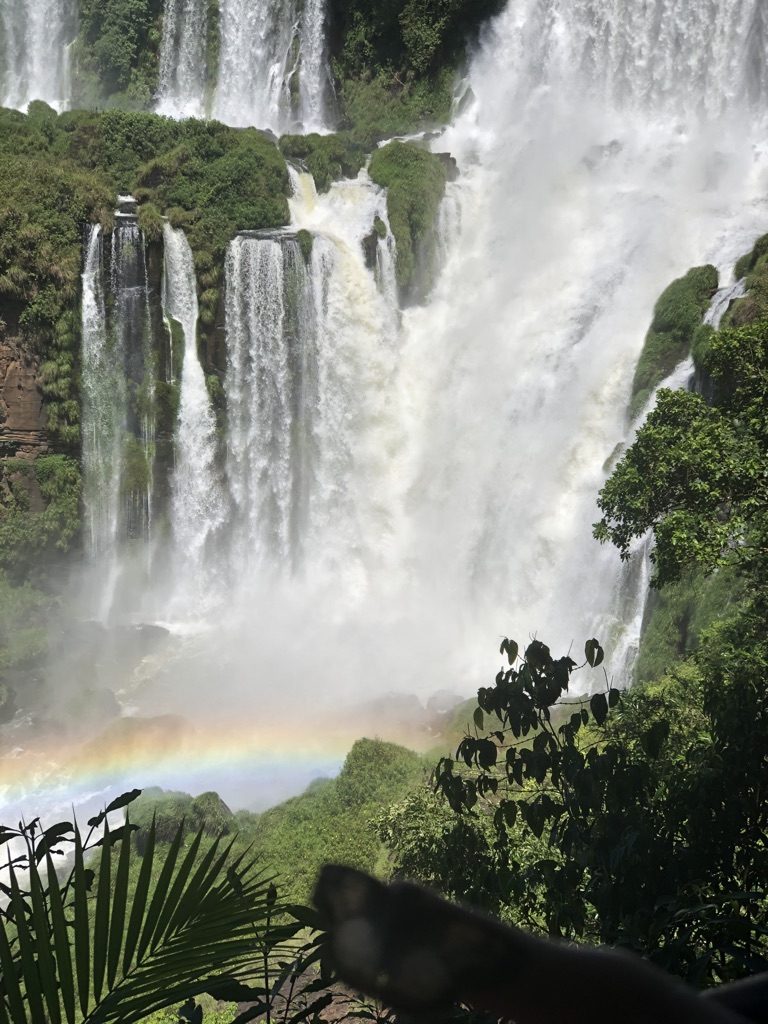 The next place we visited in Argentina was El Calafate. The main reason we went there is because of its glacier. A massive structure of jagged ice that would randomly crack and crash into the water. We took a bus to this glacier, followed by a hike around the park with views of its magnificence ever present. After the hike we enjoyed a chilly boat ride along the side of the glacier where we saw massive chunks of ice both fall of the glacier and surface up from underneath it. After the boat ride we completed a second hike and finally took a bus back home. Some of the other days in El Calafate where school day, and others were spent walking along the town’s Main Street. We left El Calafate on a three hour bus journey to el Chaltèn, a mountain tow of about 1500 people. While there we completed several hikes. The first overlooked the town and revealed stunning views of the famous Fitz Roy peak. This hike took about 90 minutes. The second was a twenty kilometre trek up to the lake at the base of Fitz Roy. We trekked through valleys and woods. We passed camp sites and rivers. It took us 7 hours to get to the destination and back. The final kilometre in the journey to the destination was devastatingly steep. We were on a bare mountain face with the best winter close we could find, the snow whipping at hour faces. We would average a 13 minute kilometre, but this one took just over an hour. When we got home we crashed instantly. The third hike we did was for Finns thirteenth birthday. It was an 18 kilometre trek through a valley. This one was a bit more casual because it only elevated 250 meters, while the other long one elevated 700. However, just the distance can be tiring. We made a just over 5 hour round trip. Later that day we went out for dinner, cake, and then packed our things. The next day we jumped on a bus and sped towards El Calafate where we would fly out of two days later. During our second time in El Calafate, we did a lot of school. We were right across from a park, which turned out to look like it was a hundred years old. I tried a new thing in my French school, a live conversation over the internet with a native speaker. I also had the chance to fill out my high school course selection.

Two days after we arrived we took a 90 minute flight to Bariloche. Bariloche has a very comfortable climate. It also happened to be a chocolate making city, so we had to go there no matter what. During our time in Bariloche there was an Iron Man race. We planned to watch it start but never did. Also in Bariloche we discovered a little chocolate shop, half the size as the ones you would see on the street, that had the best chocolate at the best price. The people in the store were very friendly and the chocolate was AMAZING. We did a few trips out of the town. One of them included a nice drive dotted with viewpoints that led to a 2 hour hike that had the best viewpoint of all. We could see the valley, cut by shimmering blue water. All around us falcons hunted, completing the scene. Another time we saw a St. Bernard dog the size of my dad.  Another day we hopped in the car we had rented and drove to a small town called el bolson. In El Bolson we visited an awesome artisan market full of different smells and things to see. I bought a few boomerangs for souvenirs for friends. The best part of El bolson is the views from the town. All around you are surrounded by rippling hills and rugged cliffs. After the market we decided to drive to a beautiful glacier lake. The shore was rocky, but I wasn’t planning on swimming in the frigid waters. However I am easily convinced, and my mom got me to take a dip. It was super cold, but I managed to ease in and dunk. For half the time in Bariloche we did school. I managed to knock off my English for the entire year, and I’m close to finishing socials. After bariloche we hopped on a plane for a long journey to salta. 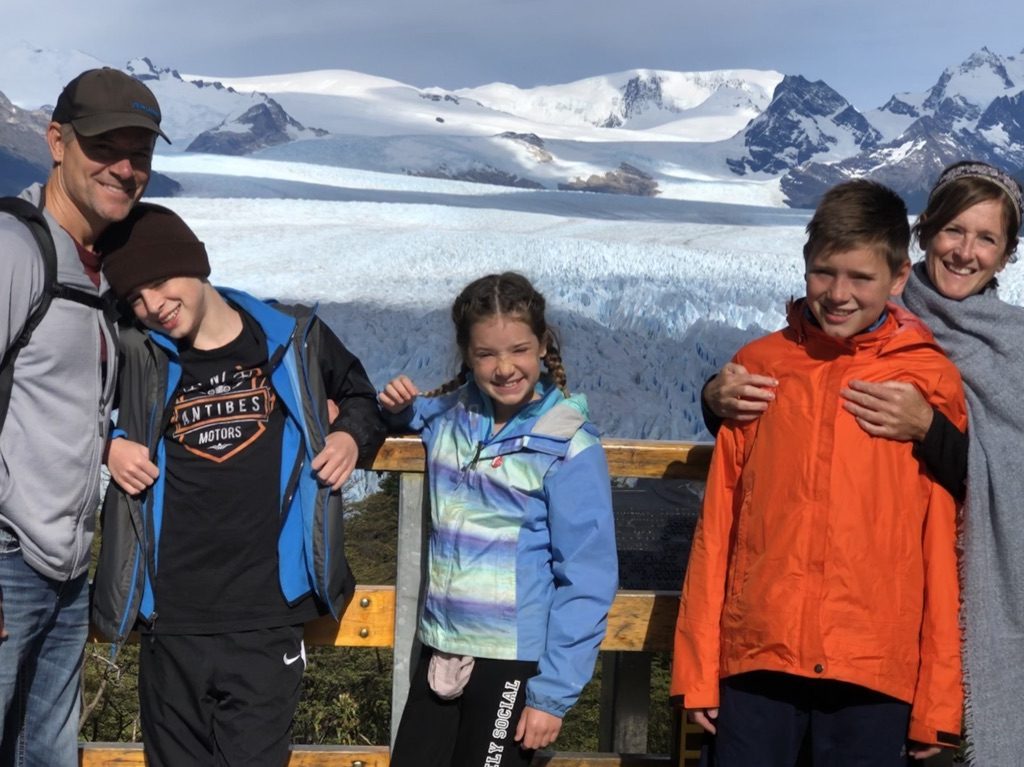 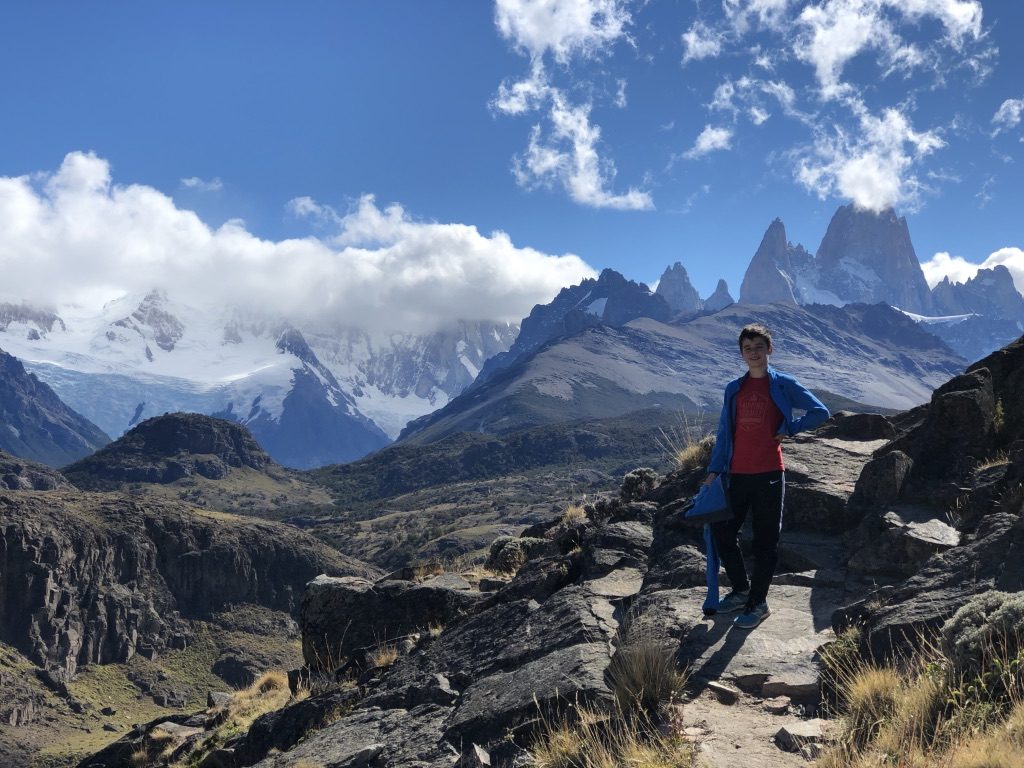