The road less travelled:  We opted for a three day bus, boat and attraction ride up the Mekong River to Cambodia versus the quick bus ride across the border.  While organised trips are not our first choice, this provided us with a great opportunity to see the river sights along the way.

Day 1: Travel from Ho Chi Minh to Can Tho City via My Tho-Ben Tre
Day one began with an extended bus ride out of the city to our first stop where we were treated to a taste of sweet honey tea and got serenaded by a local folk music group who played Auld Lang Syne.  We then enjoyed a serene river boat commute to a Coconut Candy Workshop, where the kids were more than happy to learn how to make these treats, as well as sample the various flavours.  We were not however successful in leaving without purchasing a few samples for the road trip to Can Tho.

A beautiful lunch of local flavours

Grace was the first volunteer to hold the bee hive

Day 2: Travel from Can Tho to Chau Doc Town.  We started this day with an early morning  journey along the Mekong River to the  floating market for a breakfast of pineapple and other fresh fruit purchases made along the way. I was grateful to have a satisfied appetite before we visited a local farm for a BBQ offering of Rat, Snails, Frogs and Snakes.  Grace, Finn and uncle Colin chose the snails and were actually quite delighted with their snack.  A walk around this lovely farm landed Finn in a small yet surprising sink hole where his left foot boot was sacrificed to the mud.   We then continued on the Mekong to visit a noodle workshop where the kids learned how to make rice paper, rice noodles and to sample from delicious rice noodle fried “pizza snack”.  The day ended with a magical boat tour around the wild bird sanctuary at Tra Su. Continuing our journey by bus towards Chau Doc, we had a visit at the wild bird sanctuary at Tra Su. The day ended at Chau Doc Town where we headed out for our New Years Eve family meal.

Always Up For The Adventure 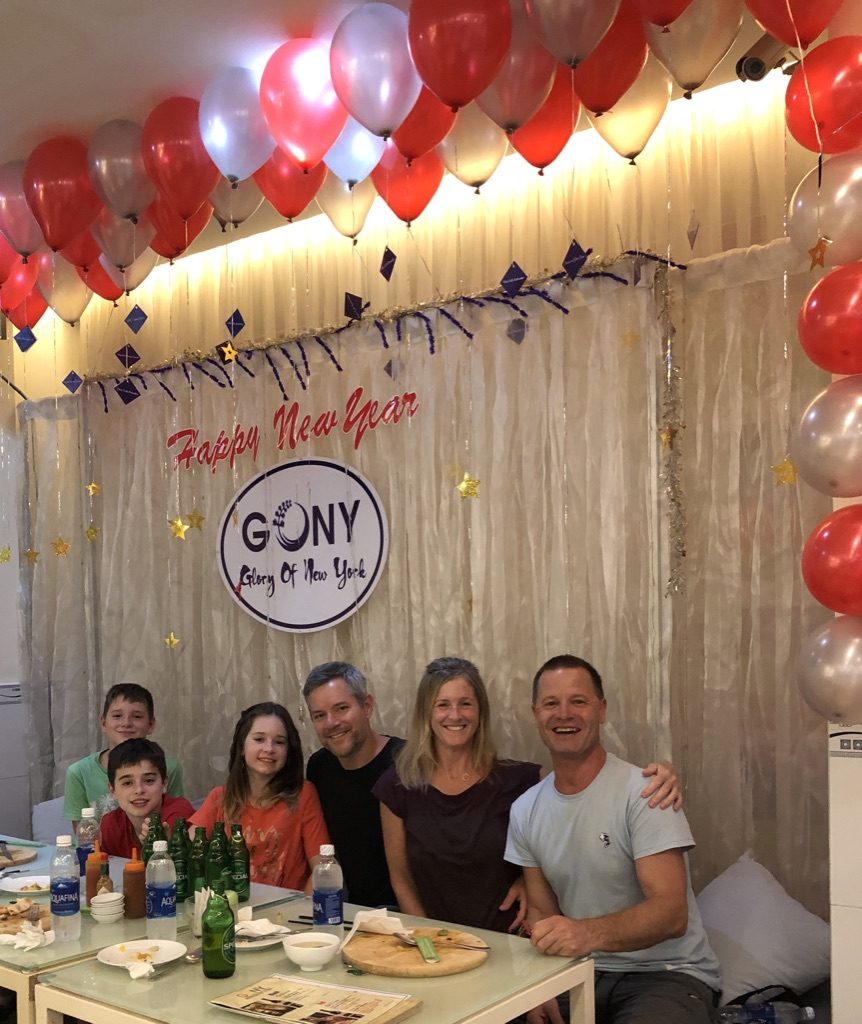 So this is where it slows down.  After almost 7 months of travel we got hit.  Scott with the flu, Grace followed suit and I decided to throw in a dose of food poisoning just to make things interesting.  Thus Phnom Phen was a quick city visit where we had a roof top pool that the kids enjoyed as they home schooled, a couple of ventures out for food, and a lot of resting up.

As the gateway to the ruins of Angkor, Siem Reap is a beautiful and colourful Cambodian City.  Here we enjoyed the exceptional hospitality of the Central Idochine Hotel which was located a few blocks away from the hustle and bustle of Pub Street and the night market.

PHARE: MORE THAN JUST A CIRCUS.

The Artists in this beautiful and creative show are all students from the Share Selpaks Vocational Training Center, a NGO school and arts training program.  This organisation was created in 1994 by a group of 9 men returning home from a refugee camp after the Khmer Rouge Regime.  They were helped through art therapy and wanted to share this with struggling youth in their community of Battambang.  Today they have created a public school, art, musics, theatre and circus school.  Today more than 1200 students attend their public schools and an additional 500 in their alternative schools.

The Phare show is energetic with live music, theatre and breathtaking circus arts.  Each performance tells a story that is unique to Cambodia.  We were fortunate to see the “Same Same But Different” performance highlighting the differing perspectives of Cambodians and visiting tourists.  It was outstanding. 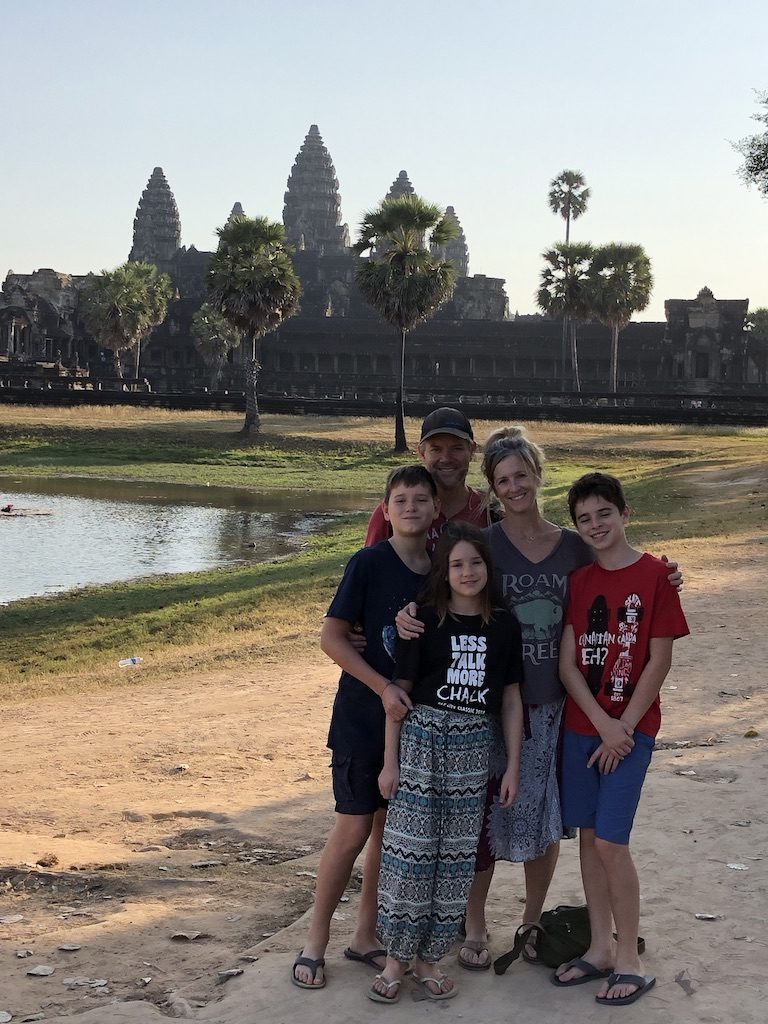 We enjoyed a harrowing cycle ride through the busy scooter cluttered streets and roundabouts to visit  the APOPO where scent detection rats, nick named HeroRATs work to eradicate Cambodian landmines. Cambodia remains one of the most heavily mined countries in the world killing dozens of civilians annually.  There are an estimated four to six million unexploded devices in Cambodia thus preventing the use of 1000’s of hectares of land that could be used for farming and housing to the local people.   “Don’t walk where the cows haven’t”  is a common motto of the local people.  At the APOPO the kids learned a bit more of this history and were given some context of the work done here through a demonstration of one of their many HeroRATs.

Our next adventure was the Angkor zip line, a Christmas gift for the family from the grandparents and so we headed off for an afternoon zip through the trees.  The beauty of this zip line experience was in the setting.  The zip line  resides inside the Angkor Archaeological Park.  Each zip took us from tree to tree as we ascended higher into the forest canopy providing beautiful and serene views.  For this experience it wasn’t so much the height as the thrill of flying through the forest.   https://angkorzipline.com/

As per most of the 1 million tourists that visit Angkor temples every year, we followed the recommendations to see the sun rise behind the famed Wat.  Originally I had sugar plum dreams of my family riding their bikes over this amazing landmark, however I soon discovered that this famous archaeological park in fact stretches over 400 square kilometres.  Taking into account the 31 degree heat this plan was deemed likely not the wisest choice.  Thus we went with Mr Chet and his Tuk-Tuk  at 4:30 am with packed breakfast and flashlight in hand.  In the dark I could hear a tourist guide leading his followers towards the lake, and thus we followed and waited in the dark for the 2 hours until the light came up and the Wat was revealed.  While the setting was stunning, it was the experience of this early morning family adventure  and excitement that made this most memorable.  The next couple of hours were spent meandering around the Wat.  Grace was too young for a part of the area so her and I decided to trek on.  With our packed banana breakfasts tight in her hand, a nearby mischievous macaque decided is was his lunch to devour and thus he stole from a quite surprised Grace.  Not wanting to leave litter behind at the temple sat there as he arrogantly completed our meal.  We then cleaned up after him like five star restaurant service.

The rest of the day was spent seeing the “small tour” of the park with My Chet.  We walked through the labyrinth of the Bayon temple, Baphun temple, Ta Keo and of course the famed Tomb Raider location of Ta Phrom where the roots of trees devour the temple stones.