I had truly zero clue what Croatia would look like. No idea whatsoever what their food would taste like. Honestly, I barely even knew what their flag looked like. My only first impression was that their airports were great at losing bags, as they lost mine when we flew in. I didn’t get it back for at least two weeks. More on that later. When we arrived in Zagreb, I looked around our apartment, and it was super nice, but then I realized we would only be in the city for one day before bussing it to Zadar. So, we went out to a nice restaurant, and I ordered a delicious club sandwich. In the morning (early) we grabbed our massive bags (I took my sisters for her) and walked for half an hour to get to the bus station. Then we hopped on an air conditioned bus for a couple hours and arrived in beautiful Zadar.

Zadar was a lot like Antibes. Very hot, narrow streets, not a lot of cars, old buildings, and lots of ice cream. While there we spent tons of time on the beach. One day, while swimming my dad found a giant inflatable obstacle course. I’d been to one in Kelowna a couple times and they’re super fun so it was awesome to find one here. Another day we found sort of a swimming hole. It was blocked of from the rest of the sea and it was really nice. My brother and sister were snorkeling, and my sister got started crying. Turns out she was stung by some kind of sea anemone. Three weeks later and she still has scars on her arm. Along the sea wall they had a row of pipes in the water. When the waves hit them, it makes noises like a whale. It’s called a sea organ. Almost every night we would walk along the sea organ and listen. It was very beautiful. Right beside it was a giant circle on the ground. Inside of it was an array of flashing lights. It was some kind of offering to the sun. We also found a 9th century church. We visited it, and it turns out they had equipped the building with protections of the art and engravings that were once there. They played old, relaxing music, and it created a cool environment that made you feel like you’re travelling through time. Another thing we did was an illusion museum. It’s very hard to explain, and yet very easy. It’s a building full of illusions. What’s hard to explain is how they work. I have no clue. Anyway, I was sick that day.

Dubrovnik is the crown jewel of Croatia. No exaggeration. It was extremely beautiful. Our place was musty, but really great because it had AC. My great uncle Colin visited for seven of the ten days. We went out for lots of drinks, and swam at our beautiful beach. One day we went on a boat tour. It took us to three different islands. They were all very pretty. Another day we went into the old town of Dubrovnik. It was like a game of thrones castle! We made our way along the outer wall, and found a rocky point where the waves crashed and created a massive wall of water, splashing everybody nearby. It’s so hard to emphasize how powerful it was. If you want to know, check out the pictures. My sister got soaked. Another morning I woke up, and the airport had found my bag, and it was sitting on the kitchen floor. I was surprised to sea it, because neither of my parents expected it to come back. We went to another inflatable obstacle course one other day. It wasn’t as good as the one in Zadar, or back near home in Kelowna, but I was surprised to find one.  My uncle found a hike we could do, and it led to beautiful views of the sea. I will never forget that view, or Croatia. 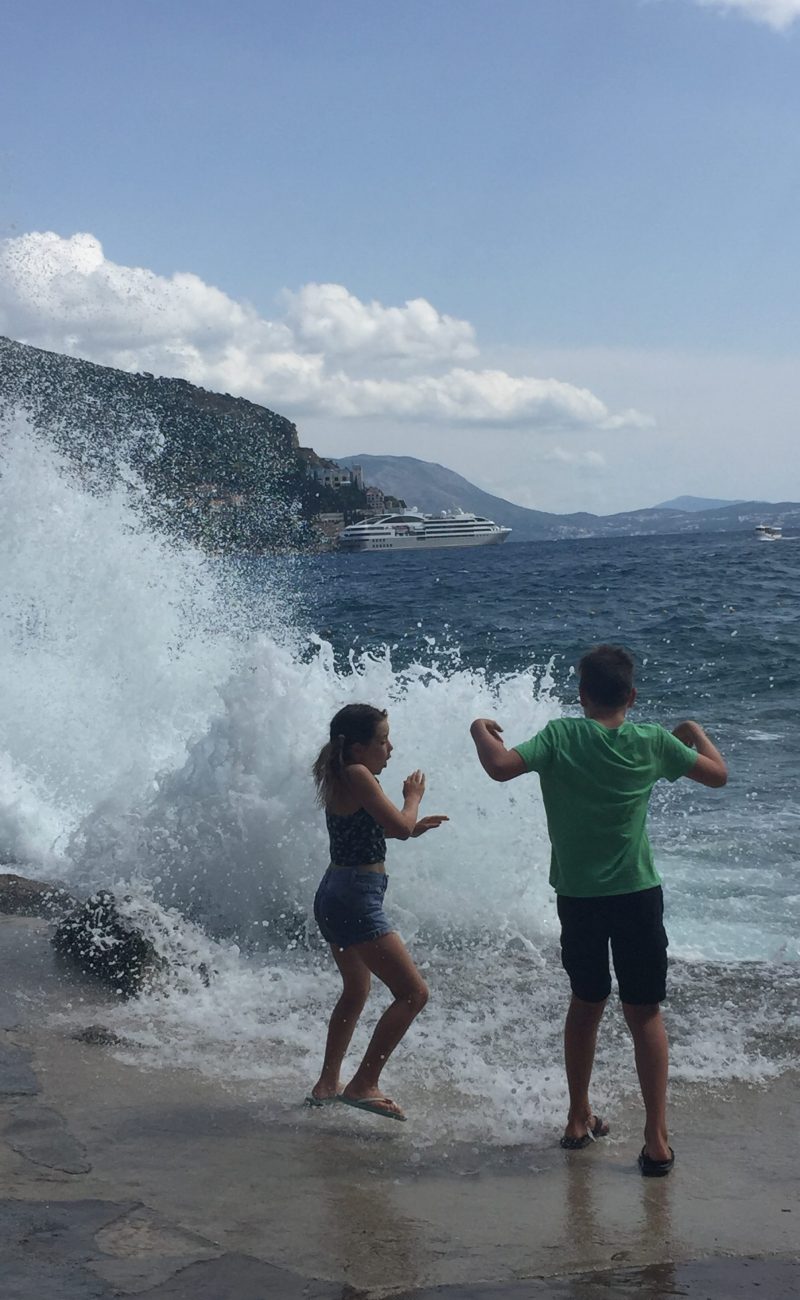