After a long journey from Madrid we were greeted nicely by our host. We were welcomed into our beautiful apartment and we caught up on some much needed rest. My mother and I also did multiple training runs for our upcoming half marathon. We were pleasantly surprised to find that there was a path to the old city. We walked it many times. For our first night out we ate shawarma, which revealed the true cost of Israel. It is a very expensive place to live. One day we can eat across a mother daughter who were also traveling. They had a dog that looked exactly like ours, so it was like seeing her again. The old city in Jerusalem is divided into four quarters: Jewish, Muslim, Christian and Arminian. We walked among the bustling markets and narrow streets. Everyone was shouting different prices and smells of spices filled the air. Also in the old city was the wailing wall. It’s all stone wall with cracks in it where Jewish people write their prayers on a piece of paper. They then take the paper and place it in a crack in the wall. It was very interesting to watch.

Another day we drove to Tel Aviv to visit my mom’s friend Hagit from 26 years ago. We were greeted by her mother, her and her three year old daughter. We spent the whole day there. Her daughter Kai was obsessed with me. She was really fun to hang out with and was very accommodating. They made us a delicious Israeli lunch and we headed for the beach where we got ice cream. We drove back to Israel through the pouring rain. A few days later, Hagit and Kai came to our apartment. Kai had never been to the old city, so we headed there again. I decided to buy a handmade chess set, so I learned to barter for a price I liked. Happy with my chess set, we left the old city and served Kai and Hagit dinner. The next day we drove back to Tel Aviv to go to the beach. We went wave jumping for a few hours. They were some of the best waves we had on the trip. Then we headed out to get a sushi dinner. One of the best experiences so far was volunteering at a terror victim support centre. It took not even two hours of my life, and I felt as though I made a difference. We bagged and stacked bread, organized fruit baskets, and met tons of nice people. 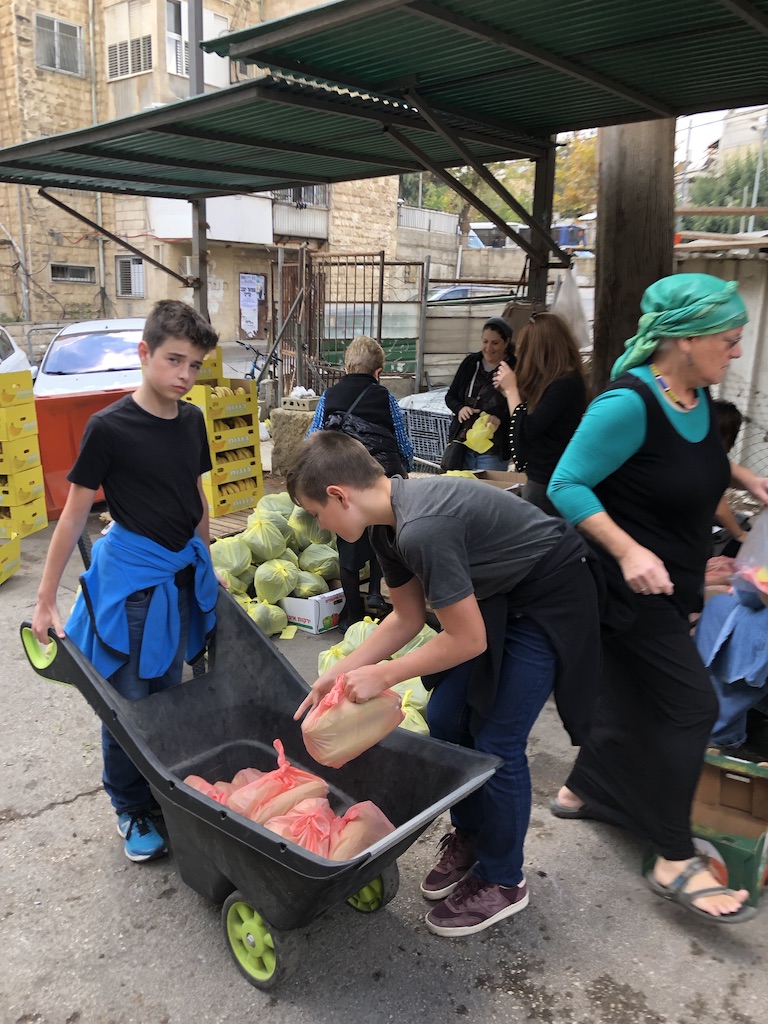 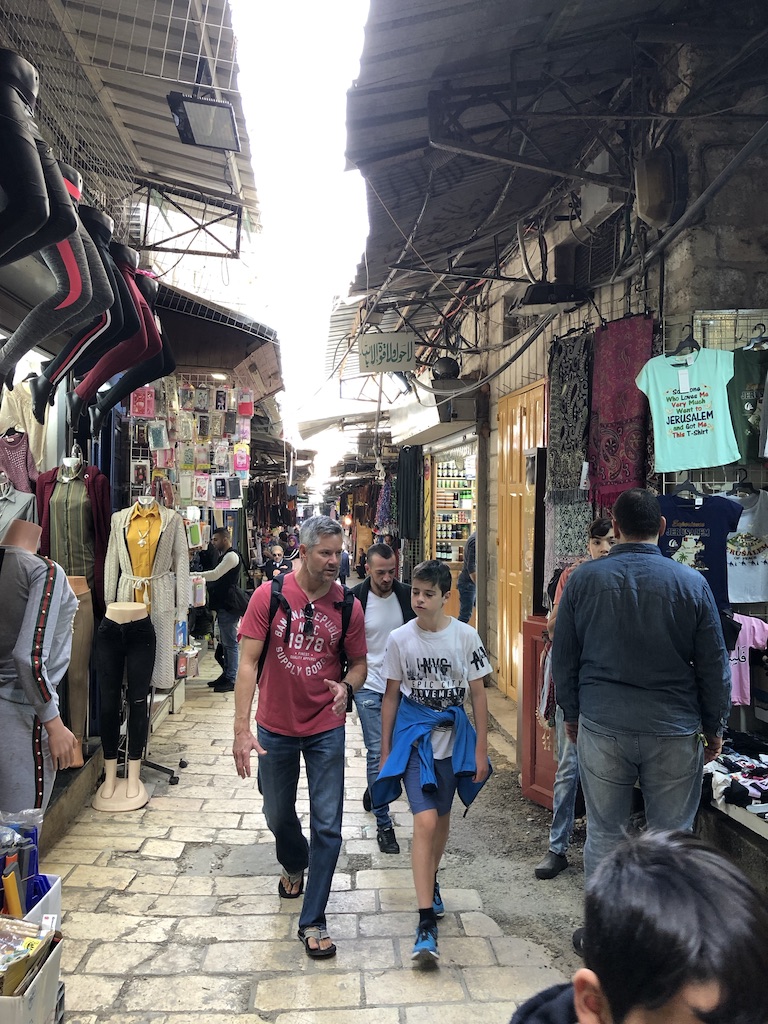 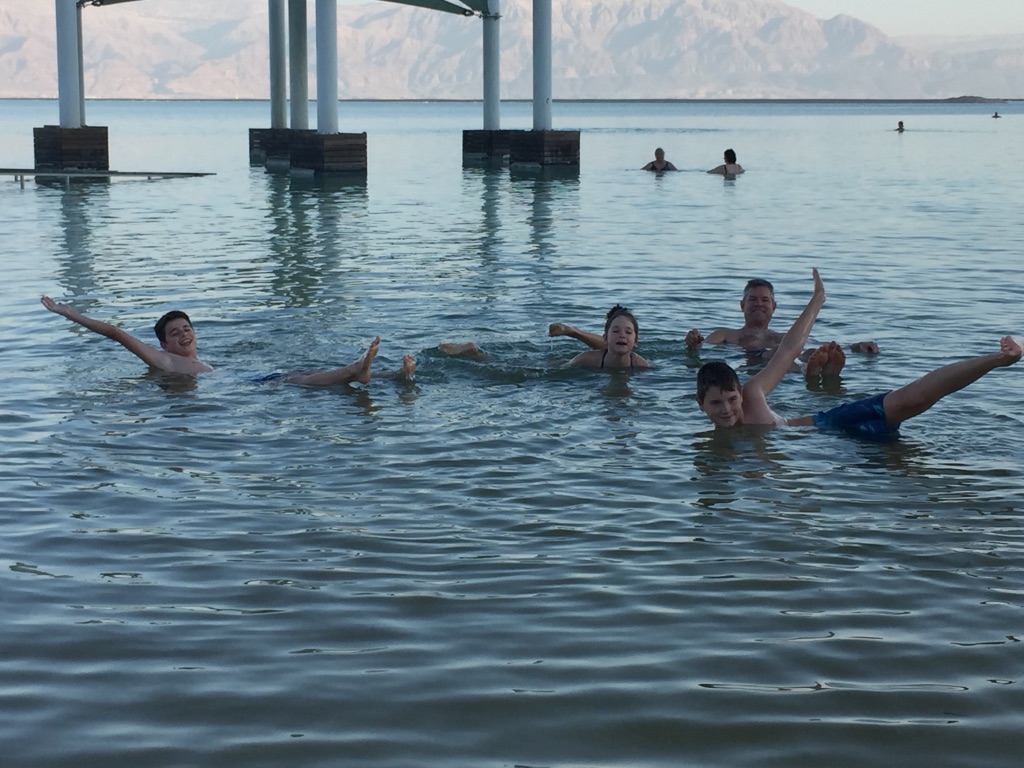 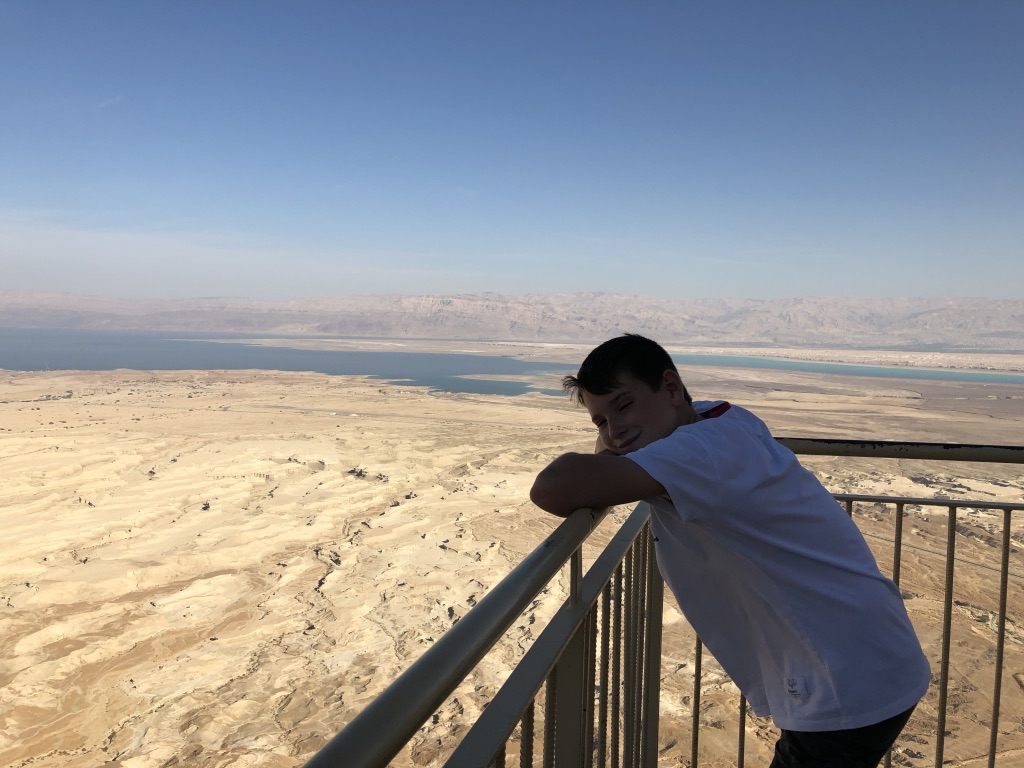 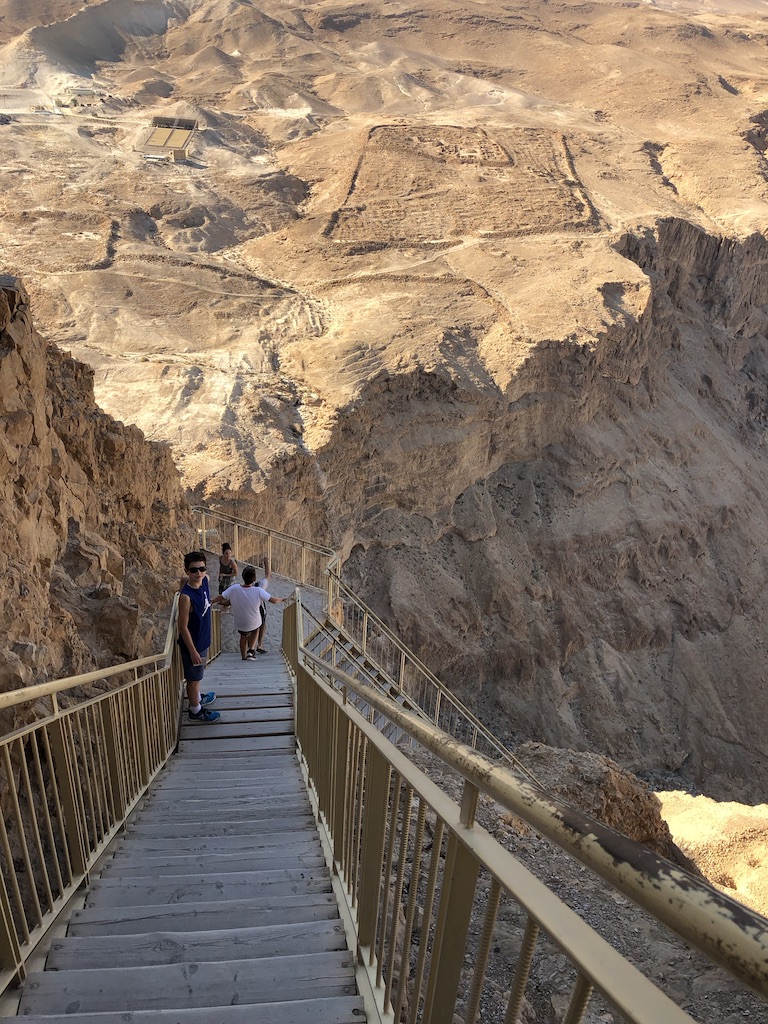 The drive to Eilat was going to be 4-6 hours. However, it was the most action packed drive of my life. On the way we saw multiple camels, and arrived in Masada. Masada is an ancient city atop a rocky desert cliff. It has a dark yet cool story behind it: during the Roman conquest, the last group of Jewish rebels came to Masada to hide. The Roman army found Masada and slowly moved towards it. The rebels had built an outer wall that was too thick for the romans to get through. So the romans slowly built a ramp out of earth and stone. They used the ramp to bring a battering ram up the mountain. It took months, but they finally broke through the wall… only to realize there was another one made of earth and wood. They decided to burn it to the ground. But when they got to the city, they found 960 dead rebels. They had committed a mass suicide so they would not have to be slaves to the romans. Seeing the city of Masada was an amazing, unforgettable experience. We saw the water system they used to collect rain, the different houses and even the main palace. Models of the site scattered around gave a feel for what the place was like long ago, and the view from the top was incredible. You could see Jordan, the Dead Sea, and every so often Israeli fighter jets made a run down the valley. When we had enough of the heat, we headed down the gondola to the ground. We drove down the desert highway to a resort village beside the Dead Sea and got into our bathing suits. I was extremely excited to prove my mother wrong and sink in the Dead Sea. However when I got in I quickly found that… well, you just can’t. The Dead Sea is the lowest surface point in earth, and has a high quantity of salt, keeping you afloat no matter what you do. We floated in the Dead Sea for about half an hour with views of Jordan and Israeli fighter jets. Ecstatic from the swim, we piled back into the car and headed off for Eilat. We arrived after dark and had to get groceries, which wasn’t ideal as we were all tired, but we soon arrived at our apartment.

THE DESERT EILAT HALF MARATHON

We arrived in our apartment tired and sore. It was a three bedroom, two bathroom flat. We got settled and went to bed. The area of Eilat is a full on desert. From our apartment we could see the country of Jordan, just across the Red Sea. While in Jordan my mother and I would be running our half marathon, so we completed multiple training runs. One day, we ran a total of eleven miles to the Egyptian border. From there you could see Jordan, Israel, Saudi Arabia and Egypt all in one place. After our run, my mother and I crashed in our beds while my father and siblings went to an aquarium. The Red Sea is not quite like the Dead Sea, but it’s famous for its quantity of fish. Our apartment had snorkels which we put to use two or three times while lounging on the beach. On the night before my race, we were going to do a family 2k run. It would be easy, but my mother and I thought it best to walk most of it so I wouldn’t be sore for the 21k race the next day.when the big day rolled around I was extremely exited. My mother and I marched down to the staring line and stretched. There was 1200 runners surrounding us. My heart was pumping in time with the blaring music. We were ready. It was a nice easy start on flat pavement, but I knew it would turn to desert in no time. We continued on the pavement for a mere fifteen minutes before it fell away from our feet and shifted to gravely sand. The terrain shifted into a steady incline, and we jogged for an hour before hitting the turn around point. At this point, I knew we were on our way back to the finish line. We had covered around 10k, and we were moving downhill now. There was no shortage of water stations and we were blessed with as cool of weather you can get in the desert. We were back to pavement in another hour with 2 miles to go. What I didn’t realize was that two miles is a long, long way to run after you’ve just run eleven.  It was a hard finish, but I did it. Nauseated and tired, I showered and slept for a few hours. It was soon time to head out on our long, long, long journey to Vietnam. Hagit invited us to her place in Tel Aviv to celebrate Hanukkah. Though we aren’t religious, we feasted on chicken, salad and bread. We even lit the menorah. I had a great and expensive time in in Israel and if I ever win the lottery I’ll make sure to go back 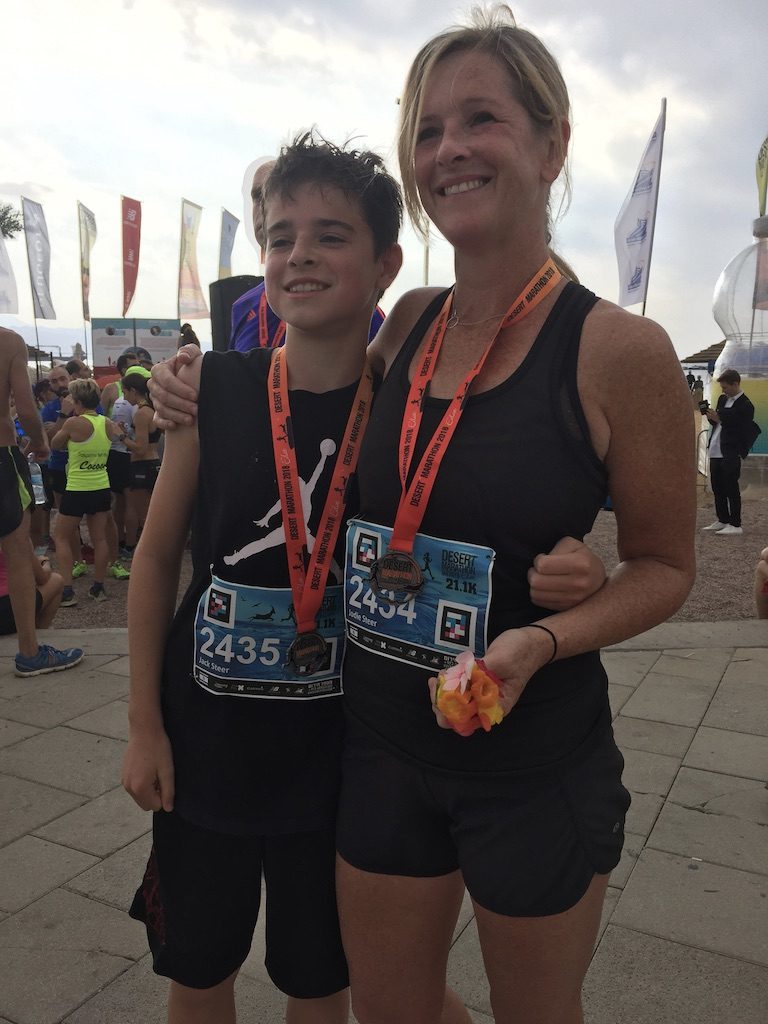 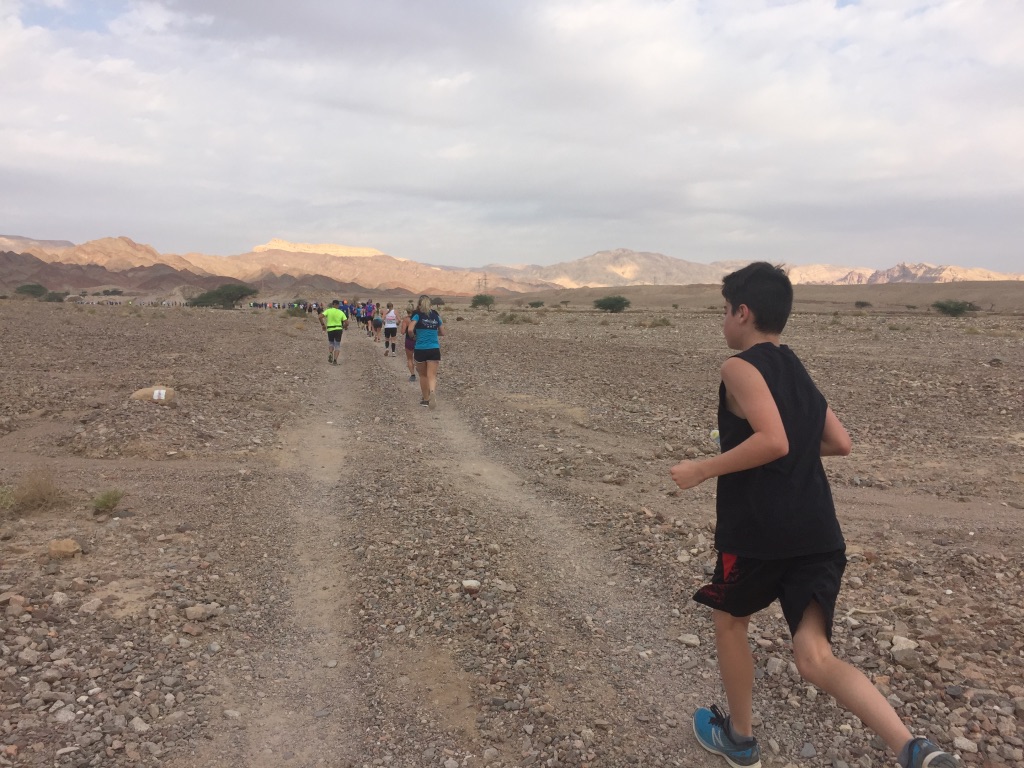 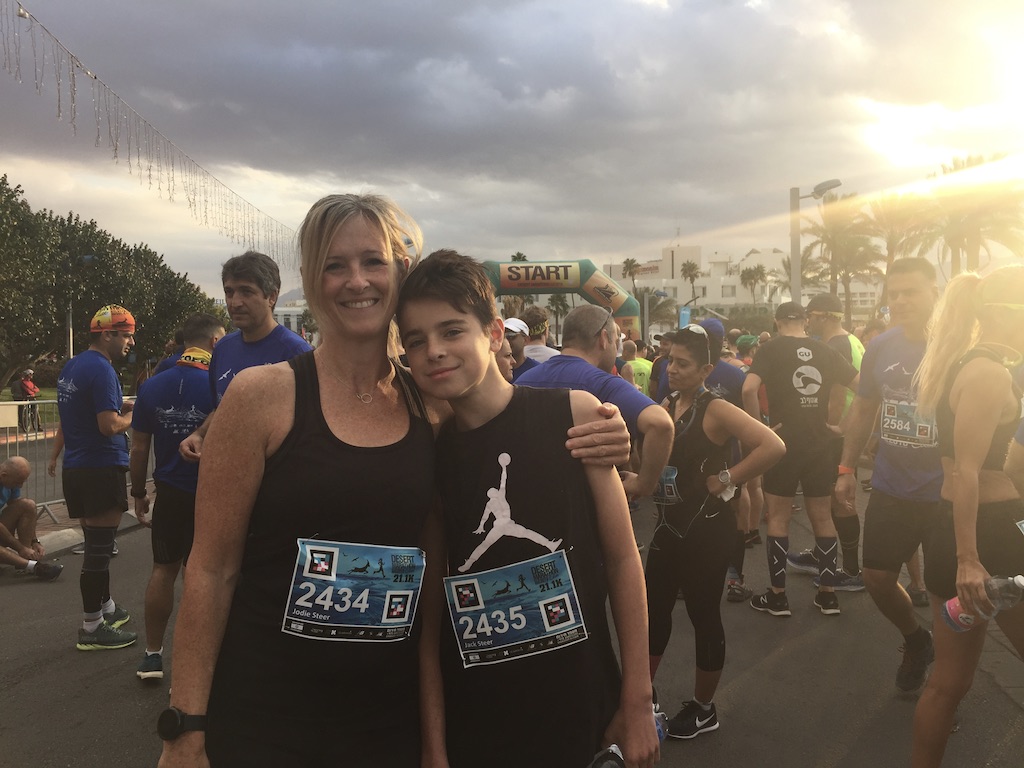