After a long flight we stumbled out of the airport and breathed in something unknown to us for 2 months: fresh air. Happy to be in new Zealand but not happy to have to drive, we headed for our air bnb. When we arrived, we instantly felt welcomed by our hosts. I got extra happy when I realized I could drink tap water, and eat a home cooked meal.While on this part of New Zealand we went to three beaches. The first beach was in a cove surrounded by emerald fields dotted with sheep. After having lunch on the beach we embarked on a beautiful walk up and around the fields. We passed more sheep than I’d ever seen before, and saw beautiful views of the coast. We completed a giant circle path around these fields with the sun on our faces as well as big smiles. The second beach was the beach we could see from our air bnb window.after finding a suitable path we made our way to this rocky Oceanside heaven. To the left and right we could see rocky cliffs, keeping the bay hidden. Behind us we could see beautifully built homes, and in front of us we got views of the endless blue ocean. And the third beach was my favourite (in this part of New Zealand) it was more open, but there were miniature caves in big boulders on sides of the beach. There were supposedly kiwi birds in the area but we later discovered that they were nocturnal. We also watched all three hobbit movies, as we were going to Hobbiton movie set. Then it was time to head to our other place. 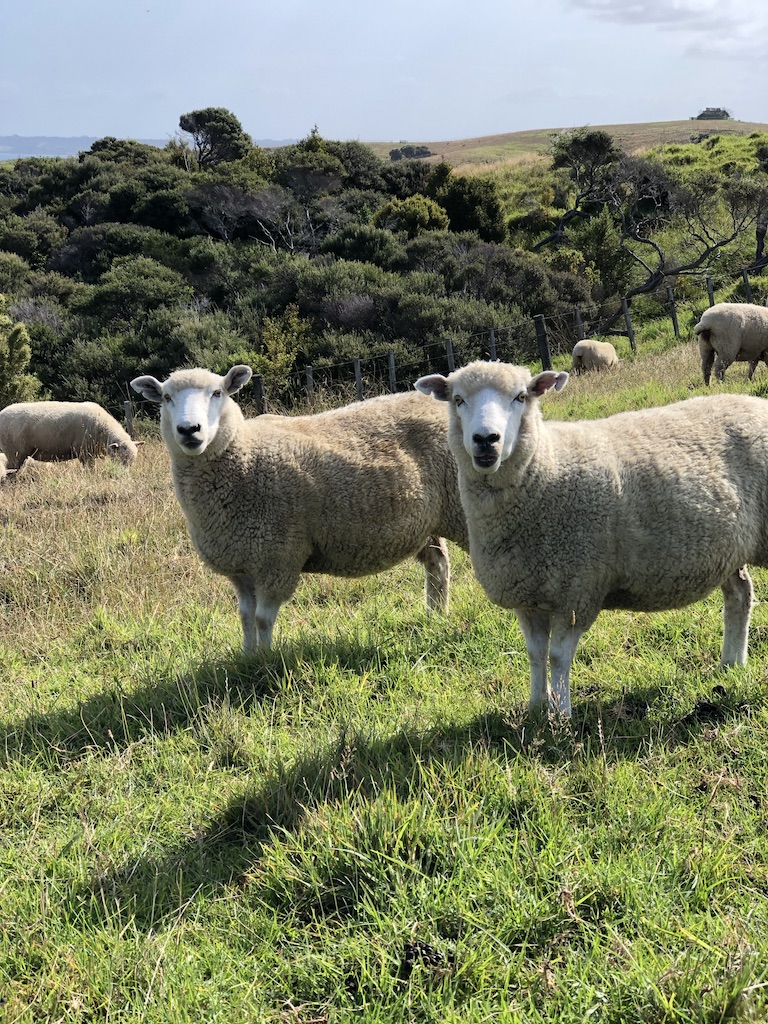 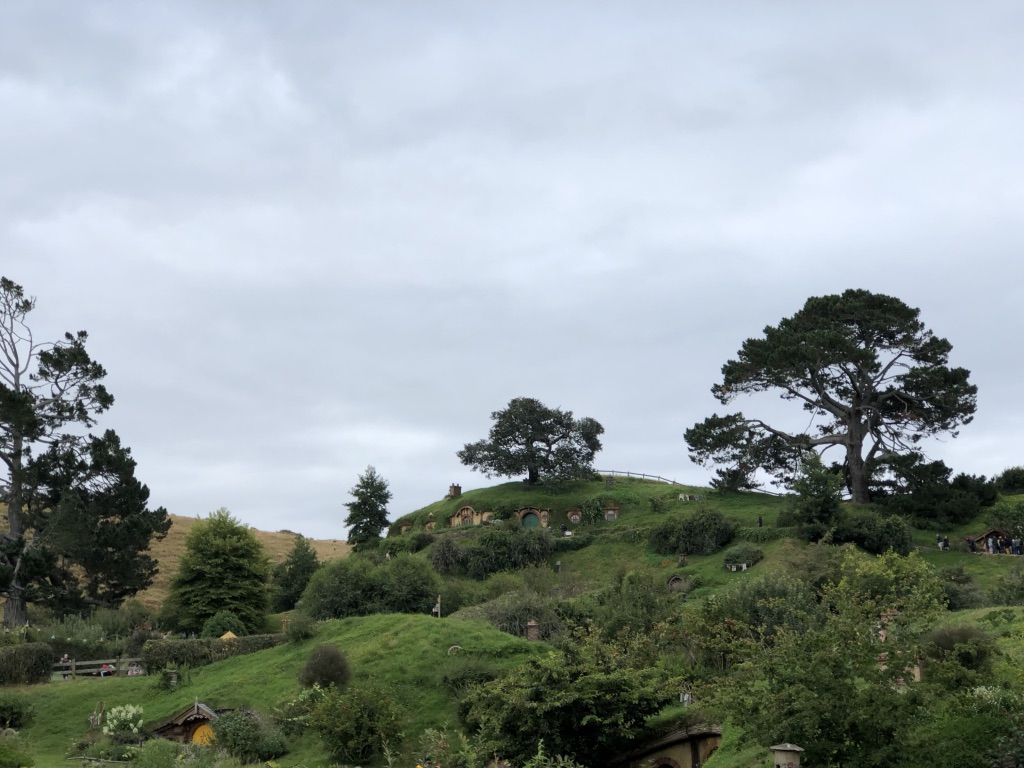 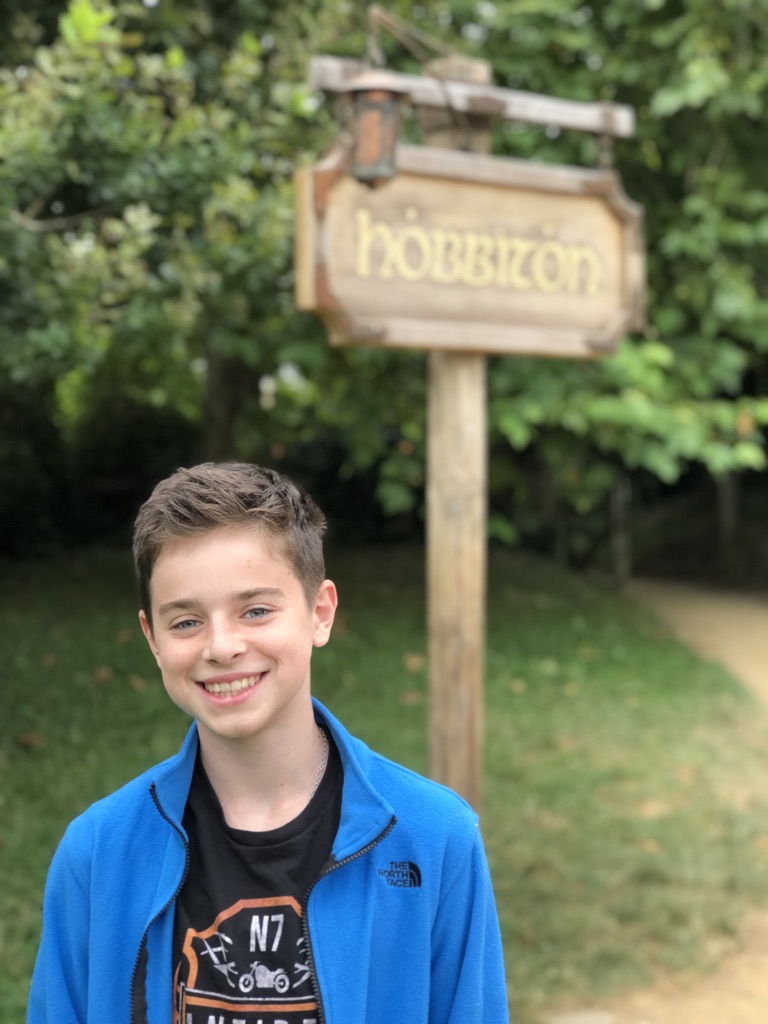 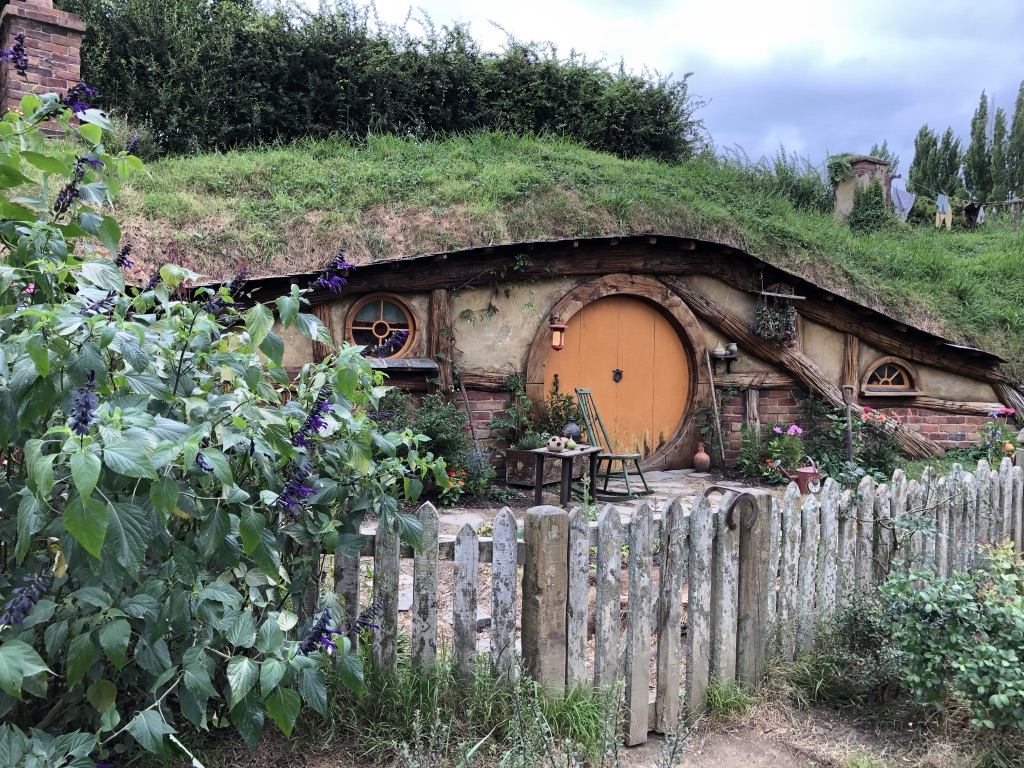 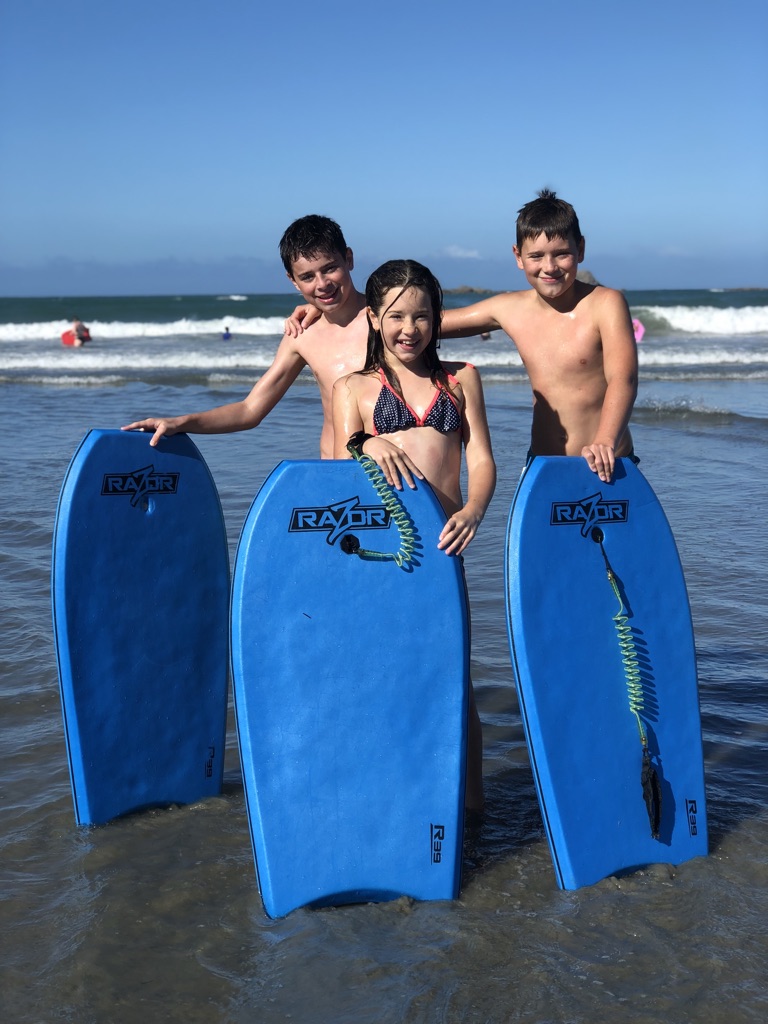 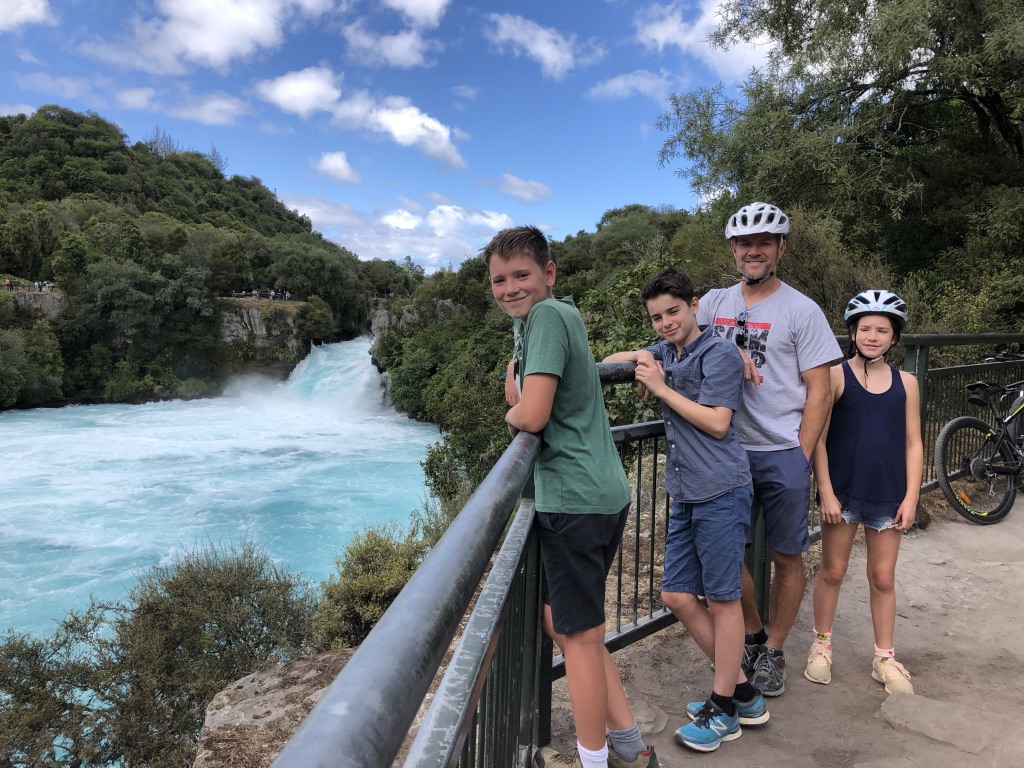 We hopped into our car and drove to what turned out to be a comfortable 60s beach house. First, we visited Kaiti waterfalls that flowed into pools of water that unfortunately were plagued with bacteria, making them unsafe to swim in. After the falls we hiked up a mountain to get views of cruise ships, the bay, the city, and even some paragliders swooping over the hills.   After that, we Next, we did the hobbiton movie set. When we arrived we had a lunch in the cafe and took a bus to the actual movie set. As I turned the corner I gasped. The grass, so green and perfectly kept. The gardens, bounding with real vegetables and plants I’d never seen before. The hobbit holes were different sizes so that when they filmed the movie, they could make people look bigger or smaller than a hobbit. Our guide was very informative and told us all sorts of interesting facts. It turns out that the tree above bilbo’s house is actually a fake tree made of metal and foam. We went in a full circle through the shire and at the bottom, in a tavern we had ginger beer. I thought hobbiton was one of the coolest things I’ve ever seen. The day after we decided to visit my friends grandma, heather. She lives in a retiree village. We arrived, talked, she showed us around, and we ate a lunch of chicken nachos. Her retiree village has a movie theatre, a swimming pool, a restaurant, an exercise room, a hair salon, and a lawn bowling field. After that nice village we went to the beach for an epic day of boogie boarding on the beach bellow the mountain we hiked previously. With huge waves we had a great time. We caught so many waves we each had rashes on our belly. I always thought boogie boarding was silly, but the bigger the waves the better it gets. One of the coolest things we did in New Zealand was the glow worm caves. We drove to the Spellbound Caves building where our guide was waiting for us. His name was Zane. We hopped in a bus, and on the way Zane told us all sorts of information on the geography, animals, and culture. When we arrived, we walked to the first caves. We had headlamps, which helped us see in the deep darkness. Then we were told to stop, and turn off our headlamps. Immediately the cave was filled with “wow!” As hundreds of worms glowed around us. We continued one and hopped in a boat, were we were pulled back and forth down a cave river. It was dark, but overhead were star-like glow worms. We exited the cave and were served hot chocolate. Then we moved onto another cave which turned out to be lit by bulbs. We learned about how animals would sometimes fall into caves, which would be too dark to find the way out of. We didn’t see as many glow worms in the second cave, but we learned more. I loved the glow worms! By far one of the busiest days was in New Zealand. It started out with a bike ride through the woods leading us to a waterfall with water that was naturally light blue, like from a water park. Then we drove to a huge plain dotted with steam vents called “craters of the moon.” The vents smelled like sulphur, and it was really cool to be surrounded by smoke that was coming from bellow earth’s crust. Next we headed to the sulphur hot springs, a naturally heated pool to bath and relax in. We all took a dip, and then drove to Rotorua, a town with an adventure mountain them park above it. On the top we bought tickets to do a luge, a go cart track down the side of a mountain. It was so much fun! It felt like Mario cart or something, zooming down a mountain in an only slightly controllable piece of metal and plastic. We got to do two rounds, even though I would’ve done a hundred. When it was finally time to leave New Zealand, I was super sad. It was enough like home for me to feel comfortable, but not too much so I felt like I wasn’t seeing something new. It was one of the most beautiful places I’ve ever been, and I’ll remember it forever.