Thailand Thailand was pretty present in conversation back home. As one of my mom’s favourite countries, I was extremely exited to visit and see what made it so special. We touched down first in Bangkok, and immediately went to see Ko San road, a place that held many of my mom’s memories. The street might have been one of the busiest places I’ve ever been in my entire life, and yet one of the coolest. There were deep fried scorpions for sale, along with tarantulas. The walls of the street were lined with clustered restaurants blaring music. People pushed and shoved around booths selling fresh and not-so-fresh fruit. At one point, and I still have trouble believing this, I saw an alligator being slow roasted over a portable barbecue. There were neon signs and people from all over the world. I had never been more confused, surprised. It was by far the craziest thing ever. No contest. I was told it wasn’t always like this, and that when my mom was there it was as quiet as a meadow, and you could duck into a restaurant and watch movies while drinking coffee or beer. We were staying in a hostel in Bangkok, which is actually better than I thought it would be. The beds were comfortable, and there were enough fans to kill the awful heat. On the roof of our hostel there was a bar and live music, so my mom and I went up to relax. During the day, Ko San road wasn’t nearly as busy, and it was more of a night life thing. My mom took me to visit the guest house she stayed in when she came to thailand. It was really cool to see where she was, and how it looked. Apparently it had changed a little bit, but it was still awesome. One of the non-amazing things in Thailand was the overnight bus ride to the shore of, well I’ll get to that. We got on the bus pretty late, and fell into what could only be described as half conscious. We were then woken up at ridiculous AM and thrown out of the bus onto a harbour. We had to wait in the harbour for 3 hours while we waited for both the sun and the boat to show up, which happened to be of similar timing. We collapsed onto the boat and found a seat. The boat bounced like a basketball on the waves and grace ran to the back to throw up... again. Why is it always her? When we finally got to the island of Ko Tao, we were too tired to care. Thrown in the back of a truck, we sped across the island. Turns out there aren't a lot of air bnb options on Ko Tao, so we stayed in resorts for a week. The first resort was on the beach, but was was only accessible through a steep hill that was not easy even for vehicles. Because of that, we hardly left the resort. For breakfast we ate from their buffet, and we spent the dinners out on restaurants along the beach. The best thing we did in Thailand was the snorkelling. We hired a boat to drive us around the island. We did four of five snorkelling spots. Each one was unique, with a world of fish all around you. There were crabs, and coral and fish of all sizes. It was like you were in a whole new world. Halfway through we stopped in an overly expensive restaurant for lunch. I was so amazed at how much was under the water. After that resort we moved to a new one on the opposite side of the island. The room we had had a mould problem, so we moved to a new one. While there we swam in the pool, and watched titanic. The buffet there was really expensive, so we only did it once or twice. Most days we would walk into town for meals. For a few days we rented mopeds. While the rest of my family went to town I stayed home and did math, but when my sister and mom arrived with scratches behind two other unscathed family members, I learned that they had crashed one of the mopeds. It was fine, and so were they. We also went out for my dads birthday, which included a nice dinner. We then travelled to Ri Leigh bay. Ri Leigh bay is my mom’s absolute favourite place in Thailand. She came there with my dad, and it was practically tourist free. We were staying in our last resort, which was a bit remote. Our first day there we walked across the island to my moms favourite beach, which happened to be packed with tourists. Apparently the island had changed a lot in 29 years. On the island I got to face one of my biggest fears: rock climbing. Ri Leigh bay is known for it’s rock climbing and I’m known for generally avoiding the activity all together. But, I’m easily convinced and later that week I was on the rocks, freaking out a little bit. I managed to hoist myself up three climbs, which for me is like climbing Everest. For dinners we stuck to restaurants, but for breakfasts we ate at the resort. I did my midterm math exam at the resort (results will not be disclosed) and I saw around thirty monkeys climb along a cliff face. It was so incredible to see them move effortlessly across the rugged edge. It was at that moment that I decided that Thailand was magical, and that I’d have to come back one day. 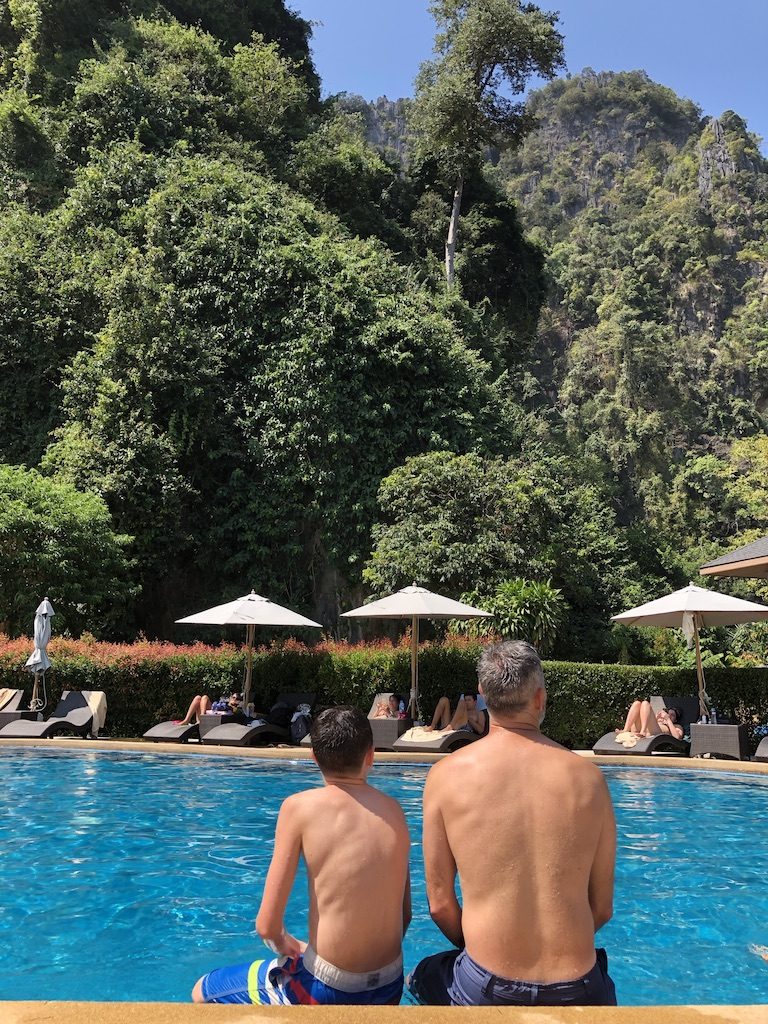 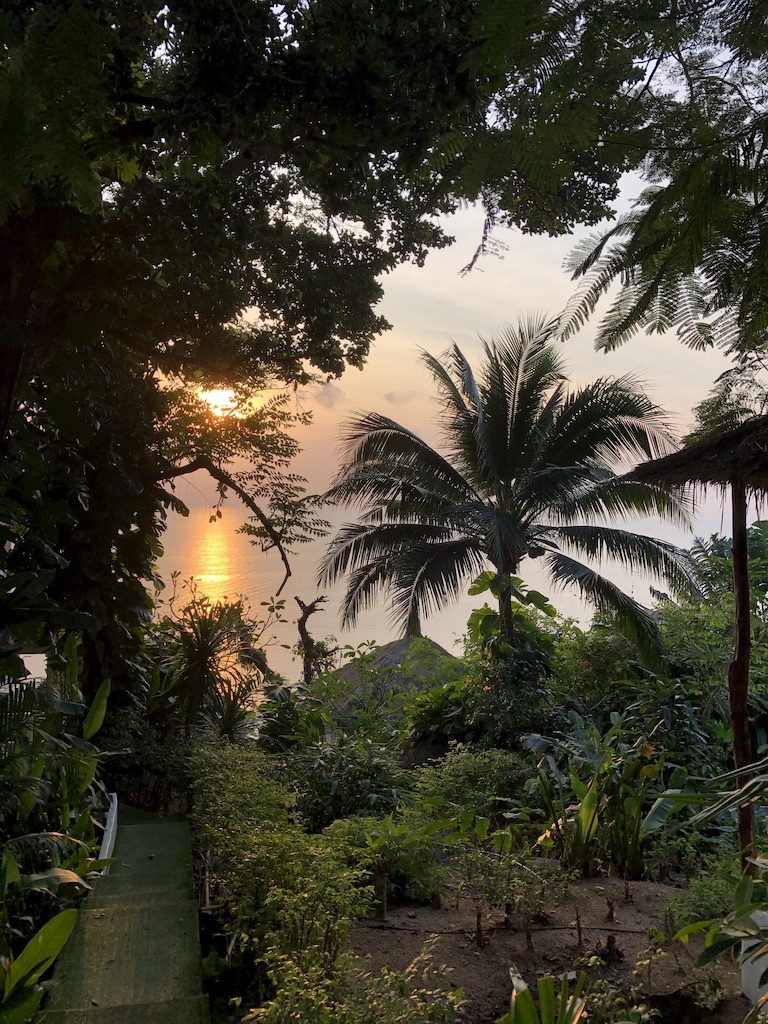 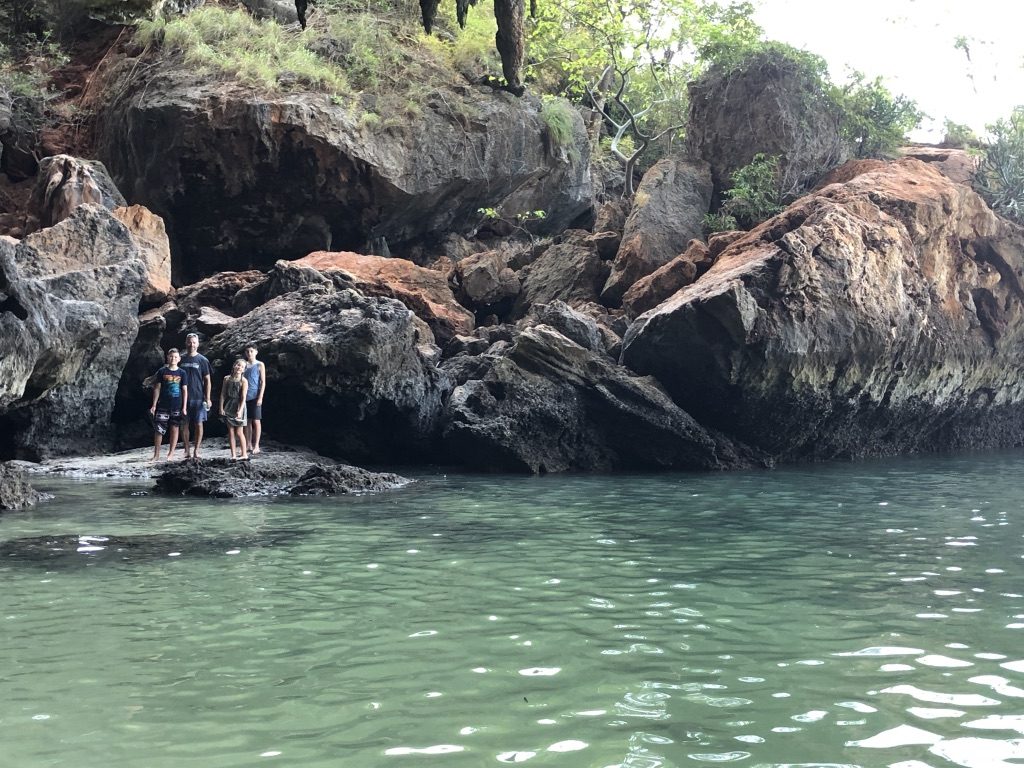 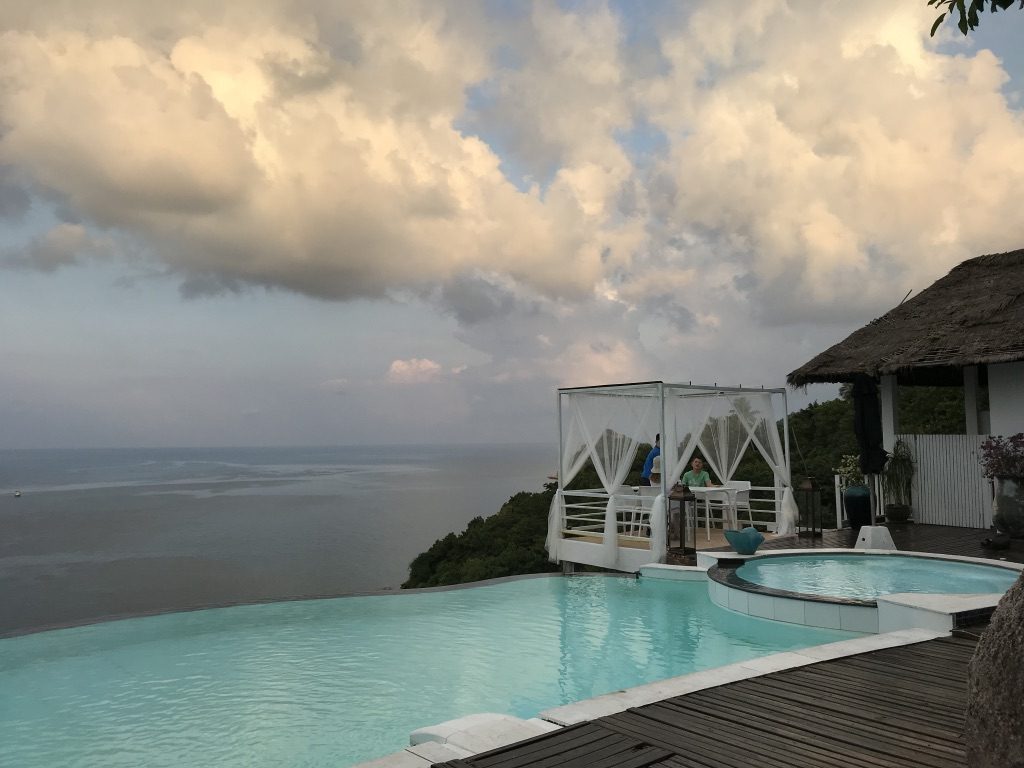 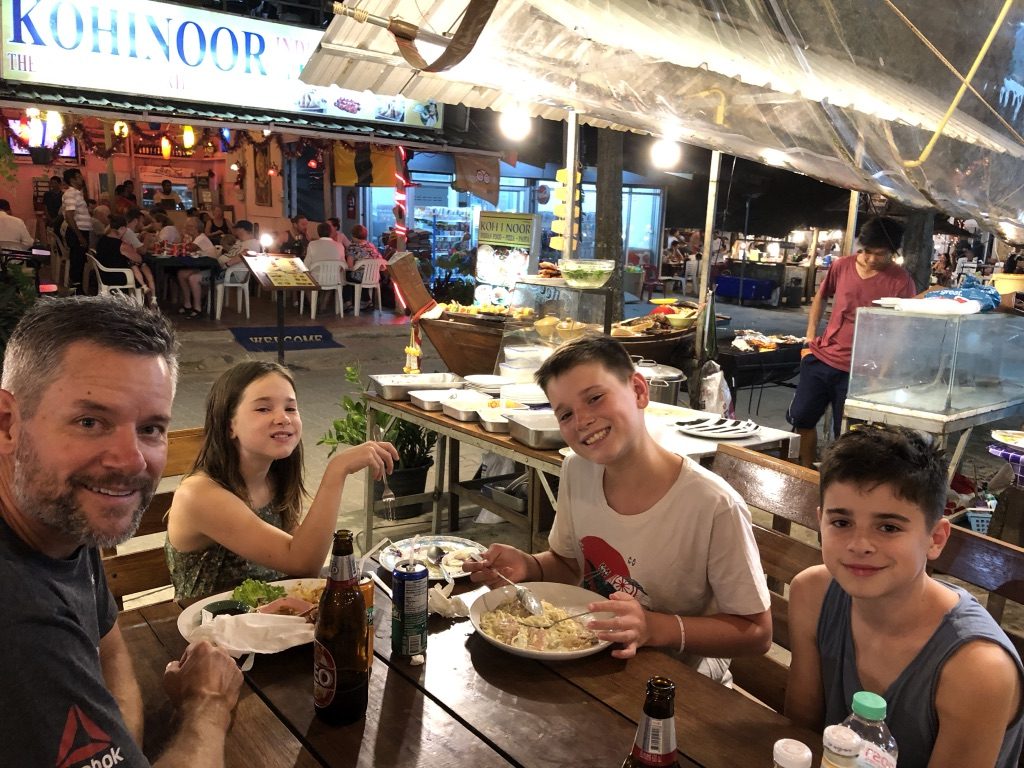 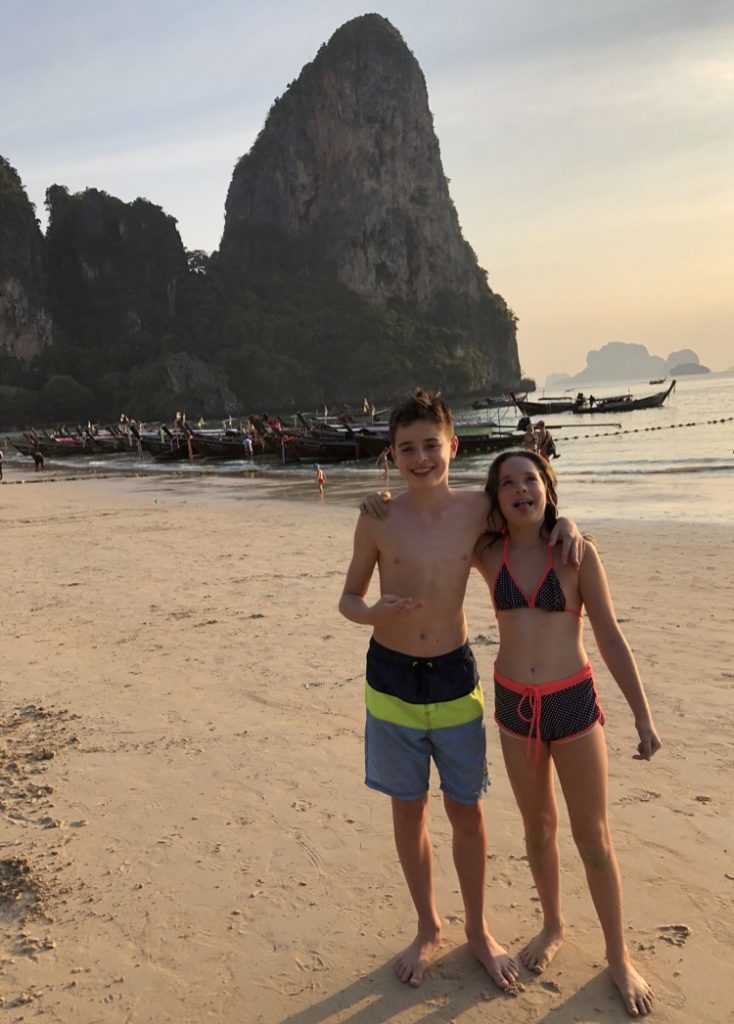 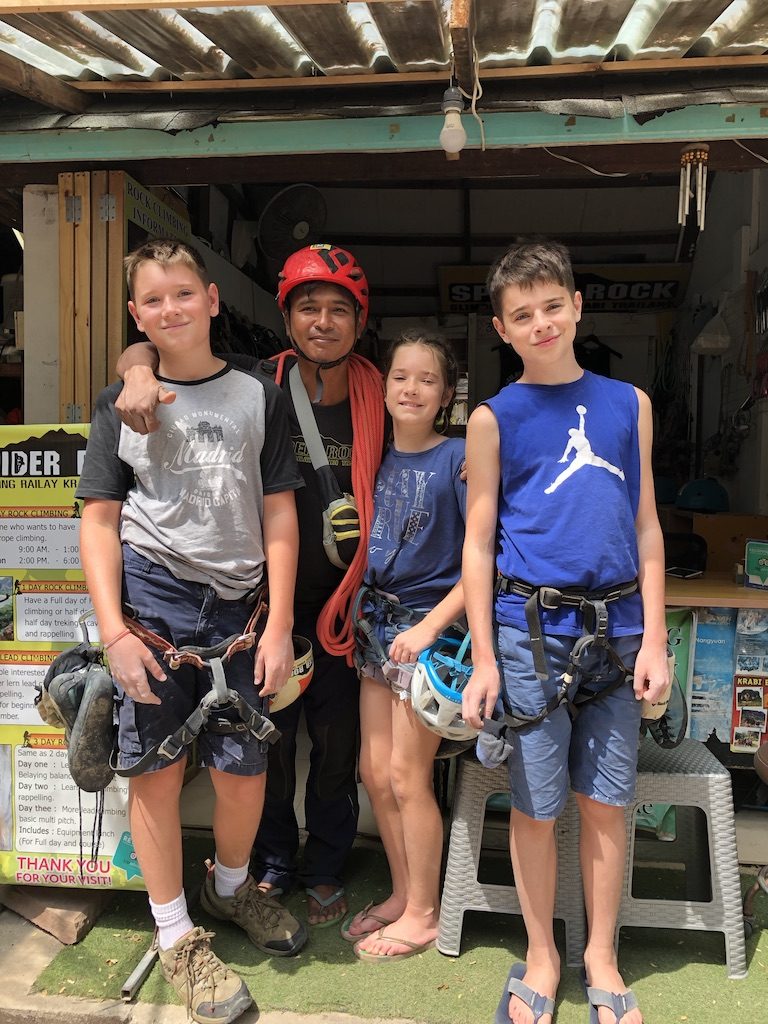 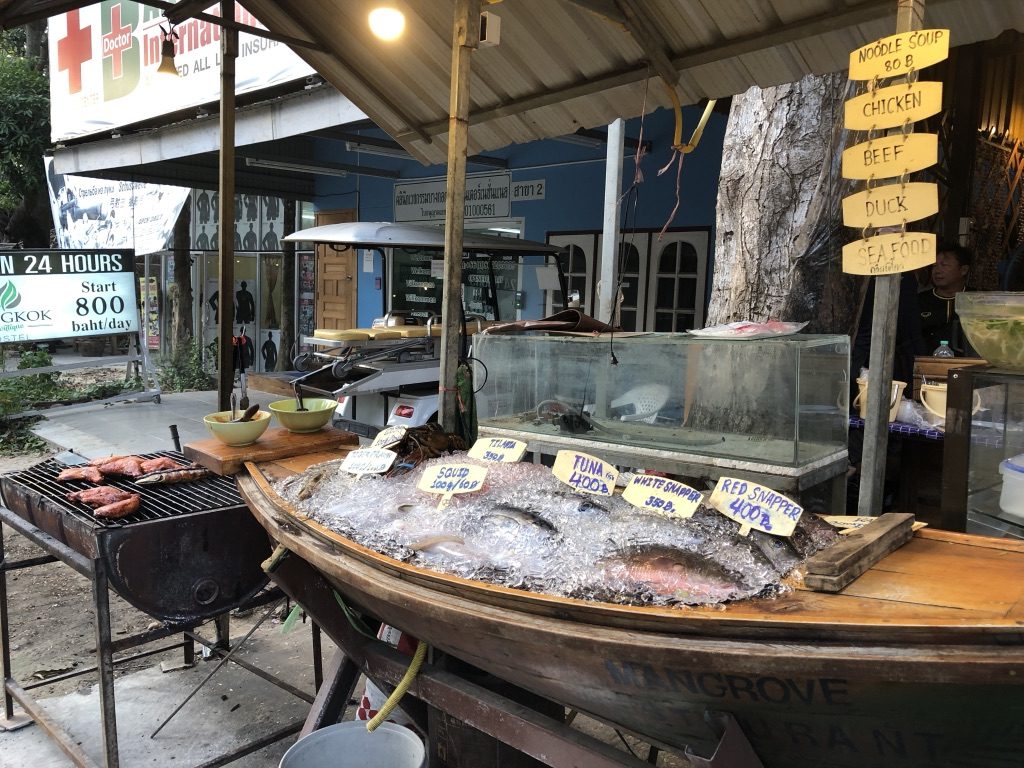 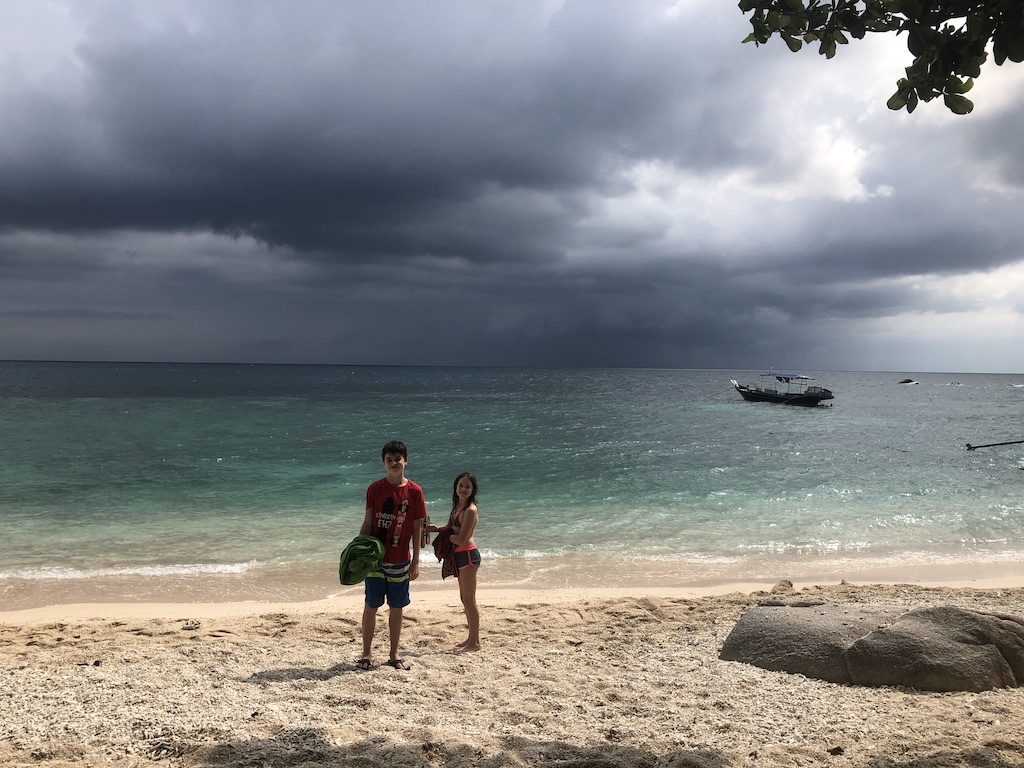 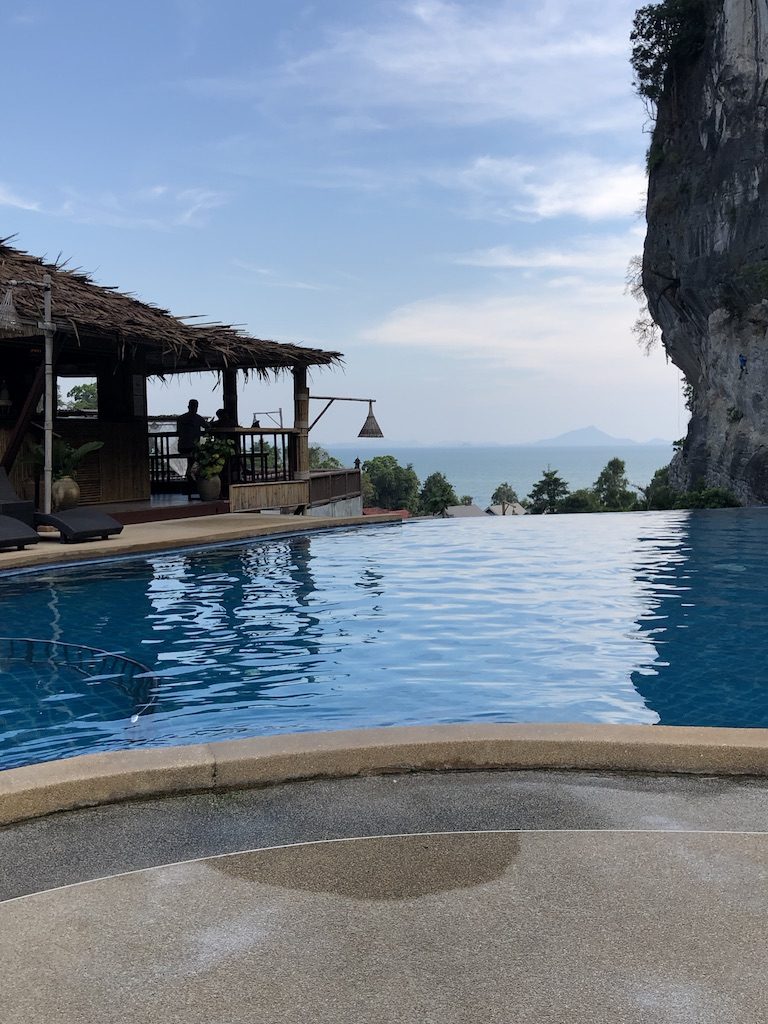 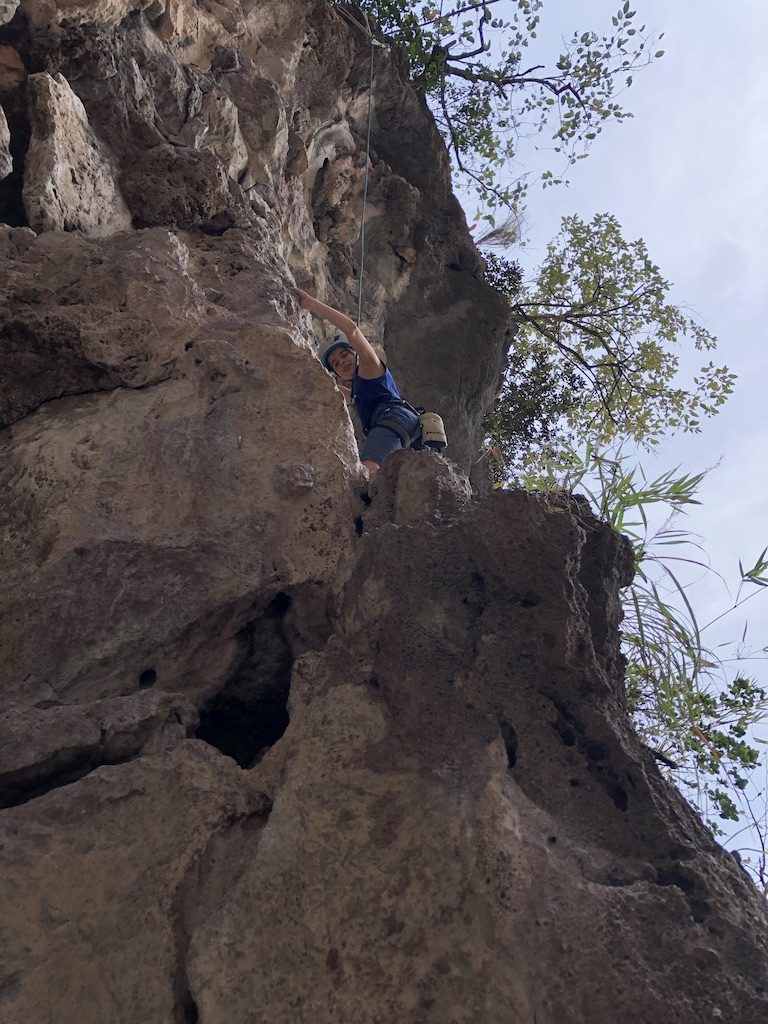 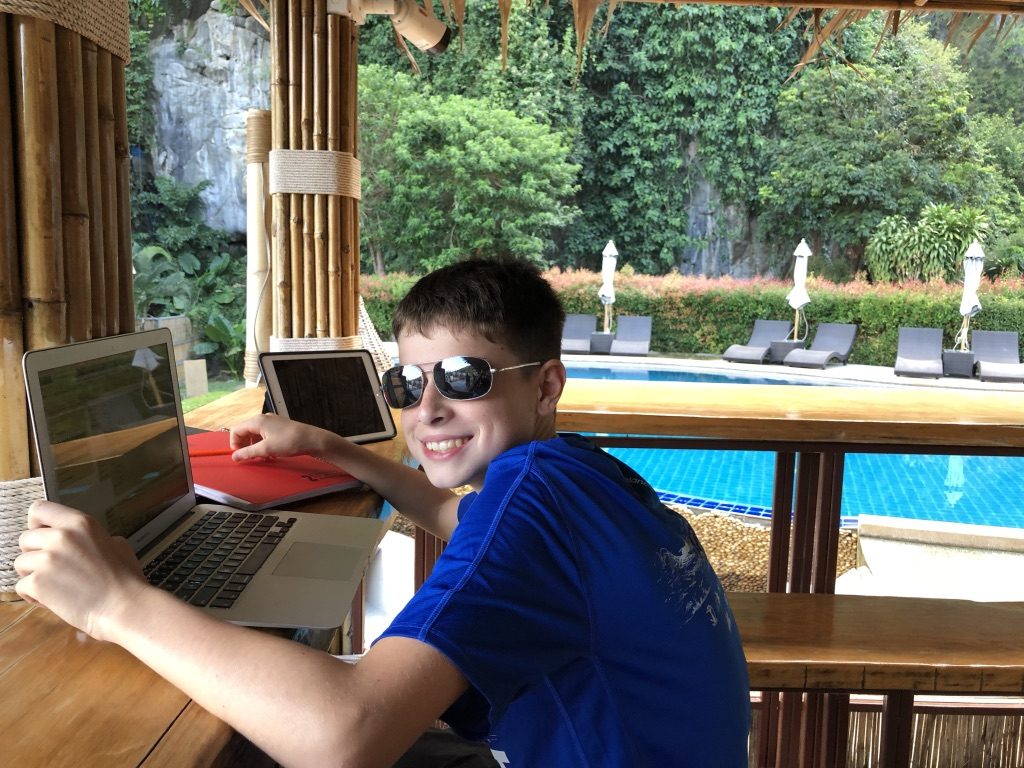